WASHINGTON — In recent weeks, truck drivers across the nation have reported encountering protests and other civil disturbances while on the road, and there have even been instances of truckers being delayed and trailers looted.

In an effort to ensure the safety of the nation’s commercial truck drivers, the Federal Motor Carrier Safety Administration (FMCSA) issued guidance for drivers who encounter unsafe conditions on the road. 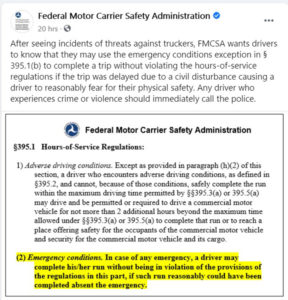 In a July 9 post that appeared on the agency’s Twitter and Facebook pages, FMCSA noted, “After seeing incidents of threats against truckers, FMCSA wants drivers to know that they may use the emergency conditions exception in §395.1(b) to complete a trip without violating the hours-of-service regulations if the trip was delayed due to a civil disturbance causing a driver to reasonably fear for their physical safety. Any driver who experiences crime or violence should immediately call the police.”

Under §395.1(b), drivers encountering adverse driving conditions that cause delays preventing them from safely completing the run within the allowed drive time can drive an additional two hours to either complete the run or reach safety. The exception also states, “In case of an emergency, a driver may complete his/her run without being in violation of the provisions of the regulations in this part, if such run reasonably could have been completed absent the emergency.”