PHARR, Texas — Friday the 13th was extremely unlucky for a commercial driver hauling a load of broccoli from Mexico to the U.S. when officers with U.S. Customs and Border Protection (CBP) discovered alleged methamphetamine worth $11,618 hidden in the shipment.

On Nov. 13, a tractor-trailer manifesting a commercial shipment of fresh broccoli arrived at the Pharr-Reynosa International Bridge. A CBP officer referred the conveyance for further inspection, including a non-intrusive imaging examination. During the secondary inspection, agents discovered that the trailer contained suspected packages of narcotics. Officers removed 330 packages of alleged methamphetamine weighing 581 pounds (263.5 kg) hidden within the trailer’s floor.

CBP seized the narcotics, along with the tractor-trailer. The case remains under investigation by agents with U.S. Immigration and Customs Enforcement-Homeland Security Investigations. 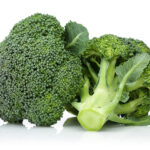 “Our officers working at the commercial facility in Pharr accomplished this discovery of methamphetamine through an effective use of all available tools and resources. These narcotics did not cross the border and will never inflict harm on our communities,” said Carlos Rodriguez, port director of the Hidalgo/Pharr/Anzalduas Port of Entry.