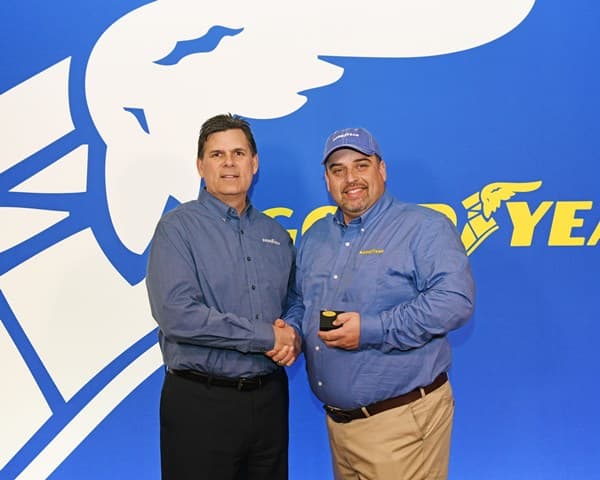 AKRON, Ohio —  For more than 35 years, The Goodyear Tire & Rubber Co. has honored truck drivers who put themselves in harm’s way to help others with the prestigious Goodyear Highway Hero Award.

“Since it was established in 1983, the Goodyear Highway Hero Award has recognized truck drivers who demonstrate extraordinary bravery and selflessness,” said Gary Medalis, marketing director, Goodyear. “We look forward to honoring this year’s Highway Hero Award finalists, each of whom took decisive action to save lives.”

Here are this year’s Goodyear Highway Hero Award finalists and their stories:

Darrell Atkins of Alvaredo, Texas. Atkins was driving down an Arizona interstate when he witnessed a vehicle containing an elderly couple get struck from behind, flip over and come to a stop on a grassy median. Atkins worked with a bystander to extract the driver, who was hanging upside down by her seatbelt. Even as gasoline began to leak, Atkins continued to remove her husband and the couple’s three dogs from the car and remained with them until emergency crews arrived.

Don Frederick of Kimbolton, Ohio. Frederick was driving down a state highway in Ohio when he witnessed a coal truck flip onto its side while making a turn. Frederick removed the damaged truck’s back window, reached into the vehicle and applied direct pressure to the wounded driver, who was bleeding heavily and trapped by the truck’s steering wheel. As the truck began to emit smoke, Frederick freed the driver’s legs and worked with a bystander to help the driver exit the truck. Frederick continued to render first aid until emergency crews arrived.

Paul Mathias of Phoenix.  Mathias had just stopped his truck at a red light in Phoenix when he saw a vehicle slam into an SUV that contained a mother and her two children. Mathias instructed the mother to perform CPR on her son and comforted the daughter as she passed away because of her injuries. Mathias then returned to the boy and proceeded to administer CPR to him until emergency crews arrived and took over. The boy survived.

Trucking industry journalists will select Goodyear’s newest Highway Hero, who will be named on March 28 during a special event at the Crowne Plaza Louisville Airport Hotel in Louisville, Kentucky, during the Mid-America Trucking Show.

Goodyear is one of the world’s largest tire companies. It employs about 64,000 people and manufactures its products in 48 facilities in 22 countries around the world.