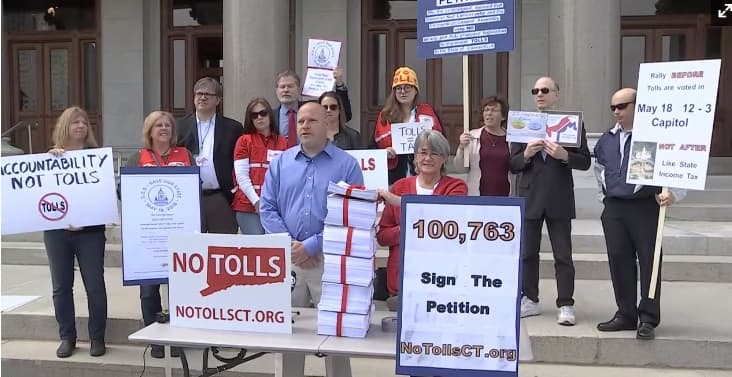 HARTFORD, Conn. — An anti-toll organization No Tolls CT has delivered a petition with over 100,000 signatures to Gov. Ned Lamont in an effort to prevent lawmakers from passing legislation that would create additional toll roads in Connecticut.

A vote on the plan is believed to be imminent.

Lawmakers are under pressure to fix the state’s transportation infrastructure, and Democrats are adamant that tolls are the answer.

However, the anti-toll movement is firing back, with a petition that argues taxpayers shouldn’t have to pay to drive to work, according to a report on television station WFSB..

After the petition was delivered, an anti-toll rally was held on the steps of the State Capitol.

“I don’t think any other petition has gotten that many signatures. Our goal now is to make sure governor and lawmakers in this building understand taxpayers have had enough,” said Patrick Sasser, founder of No Tolls CT.

Numbers released last month showed that drives between the state’s largest cities could cost drivers between $1.28 and $1.80 per trip.

WFSB reported that Lamont has been saying he will release an updated toll plan, but it will still include 50 gantries on all major highways like I-91.

According to the No Tolls CT website, the petition is short and to the point:

“We, the undersigned, demand that Governor Ned Lamont veto and the Connecticut General Assembly vote NO on any, and ALL, proposed legislation to implement TOLLS in the State of Connecticut.

The proposed tolls will:

The website also makes the following claims about what toll gantries will do:

MORE democrats stealing from taxpayers !! How about lawmakers stop giving themselves pay raises ? How about not letting state troopers idle their vehicles all the time or use those vehicles for personal business ? How about having orange trucks not idling constantly or the “workers” in those trucks actually working ? Is it necessary for a person to sit in a crash prevention truck for 8 hours ? Maybe grab a shovel LIKE IN EVERY OTHER STATE !!! TOLLS ARE JUST ANOTHER MONEY GRAB LIKE THE “TEMPORARY” STATE INCOME TAX !!!!! I suggest to everyone to get out of Connecticut if you have nothing keeping you in the state…and to ALL WHO VOTED FOR daniel malfoy junior…HAHAHAHA I HOPE YOU ALL FEEL MAJOR FINANCIAL IMPACT IF YOUR BOY needle lameont managed to get this passed !!!!!!!!