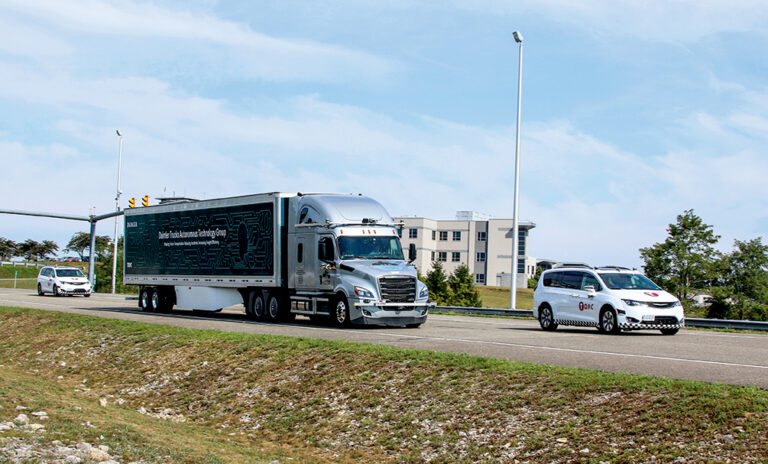 Almost anyone who grew up in the U.S. in the 1960s or later will remember watching television series and cartoons that showed visions of life in the future. High-tech cars were often part of the storyline, such as The Jetsons’ flying car or KITT, the AI-driven Pontiac Trans Am that assisted hero Michael Knight in his fight against injustice in “Knight Rider.”
But all that took place in the future, or in some alternate universe, right? Not necessarily.
Progress in artificial intelligence exploded in the last decade, and AI “assistants” such as Amazon’s Alexa, Apple Inc.’s Siri and Google Assistant are now commonplace in homes around the world. Online retailers such as Amazon are planning to use automated drones to deliver packages to homes and businesses sometime this year, and larger automated drones that can carry passengers are also in development.
Self-driving cars have been traversing the roadways for several years, including the Google car, which shoots visual images for the Google Maps app, and for-hire transport vehicles from companies such as Lyft and Uber. While there have been some accidents, a few resulting in fatalities, the technology continues to advance, with added safety features and enhanced sensors.
Autonomous vehicles are classified from Level 0 to 5. Level 0 vehicles require constant supervision by a licensed driver but offer cruise control as well as lane-departure and proximity alerts, and driver interaction slowly decreases until Level 5, when the vehicle’s AI system is responsible for all driving maneuvers.
Several manufacturers have partnered with AI specialists to bring this technology to the trucking industry, and self-driving tractor-trailers are being tested around the U.S., as well as in other nations.
In 2016, Budweiser safely delivered more than 50,000 cans of beer along a 120-mile stretch of highway in Colorado via an automated truck developed by Otto Motors. That’s not to say there was no driver in the truck; however, the driver exited the driver’s seat once the truck, which was escorted by four Colorado state troopers and three Otto vehicles, entered the highway.
In December 2019, an autonomous Level-4 semi, using technology developed by Plus.ai, made a 2,800-mile trip to deliver a shipment of Land O Lakes Butter from California to Pennsylvania. As in the case of the beer-delivering Otto truck, the truck had a human driver on board during the three-day trip; however, much of the journey was made in autonomous mode, according to Plus.ai.
Self-driving rigs are making their way into heavy-duty trucking as well, with Class 7 and Class 8 trucks at various levels of testing.
In January, trucking-manufacturing giant Kenworth quietly debuted its first Level-4 autonomous rig, a conventional T680 tractor outfitted with AI technology, in the PACCAR booth at CES in Las Vegas.
“Kenworth and the PACCAR Innovation Center in Silicon Valley are working closely together to explore and develop the latest advanced driver-assistance systems and other new technologies that offer safety and efficiency benefits for truck fleets and drivers,” said Patrick Dean, Kenworth chief engineer. “The Level-4 Autonomous Kenworth T680 is a perfect platform to study this technology in real-world applications.
Waymo, the self-driving car company that developed the Google car, started testing self-driving Class-8 trucks last year, first making freight runs to Google’s Atlanta data center and then testing the vehicles on highways in California, Michigan and Washington state. Last month, the company expanded its testing into New Mexico, as well as into heavily populated metropolitan areas of Texas such as Houston, Dallas and El Paso.
Germany’s Daimler is also a contender in the arena, partnering with Torc Robotics to enhance its trucks with “Asimov” self-driving technology, which has been tested on public roads – so far with zero accidents. The company plans to expand its road testing in the U.S.
“To keep our promise to always deliver the safest and most reliable products to our customers, we have to explore and deploy new technologies,” said Roger Nielsen, Daimler Trucks North America president and CEO. “Achieving our safety targets with highly automated driving systems requires extensive testing and building trust in the capabilities and benefits of these technologies.”
Completely unmanned trucks could soon be a mingling with conventional vehicles on the nation’s highways.
Last June, Starsky Robotics, an autonomous-trucking startup that recently made the news because of its loss of funding, became the first company to put a completely unmanned truck on the highway. The Volvo tractor, towing an empty trailer, was remotely guided nearly 10 miles along a closed portion of a Florida expressway at 55 mph, navigating merge lanes, a rest area and lane changes without incident. Real-time cameras mounted to the truck conveyed information to the remote driver, located in Jacksonville, Florida, who guided the truck using a video-game-style steering wheel.
At the FTR Transportation Conference in Indianapolis last fall, Paul Schlegal, then senior vice president for Starsky Robotics, said he foresaw the role of truck drivers shifting, performing much of their work from remote monitoring locations.
“Eventually, our vision is that the job of the truck driver is they go into an office that would be much like an air traffic control center,” he said, adding that a physical driver would still be needed to move autonomous trucks from pick-up points to the highway, where the remote driver would take the wheel.
What does all this mean for the future of trucking? Time will tell.