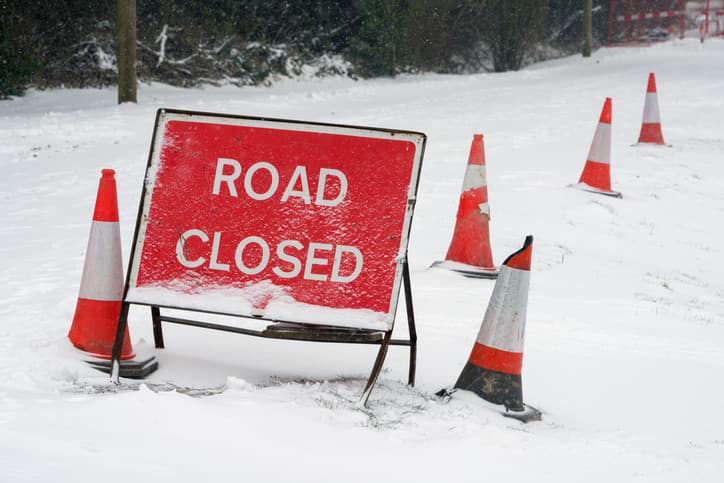 DETROIT — The pushing of Michigan’s roadwork into the colder months comes with great costs and risks for two of the area’s biggest projects.

Work laying concrete has continued on Interstate 696 in Macomb County and Interstate 75 in Wayne County despite temperatures below or at 40 degrees, which, according to the American Concrete Institute, is the temperature for which measures to prevent freezing must be addressed.

Costly precautions must be in place, including protecting fresh concrete from freezing by placing heaters along a route to ensure the concrete will take.

“Nobody wants to build roads in the winter,” said Kevin MacDonald, a principal engineer with Minnesota-based Beton Consulting Engineers.

In other words, he said, for every dollar spent on a road project conducted in July, it will cost between $1.30 and $1.50 in the winter.

MacDonald said the cost for heating and enclosing concrete pavement is approximately 30 to 50 percent of the cost of the material and labor, “depending on a number of factors.”

“Modern highway construction in cold, wet climates requires highly durable, as well as high-strength concrete,” he told The Detroit News . “This can be achieved in cold weather, so long as precautions are taken to ensure that the concrete has adequate strength.”

But MacDonald noted taxpayers usually are not footing the bill for the higher costs.

“Typically, these types of costs fall into means and methods over the contractor,” he said. “As such, the contractor will bear the cost.”

A Michigan contractor working on one of the major road projects said his employees are using necessary precautions, and they are being closely monitored by the Michigan Department of Transportation to minimize the risk.

Joe Goodall, vice president of Dan’s Excavating Inc. in Shelby Township, which is working on the I-75 project, said yes, contractors are working to prevent the ground from freezing.

Goodall said workers are “covering the concrete when temperatures look to be dropping below freezing overnight or throughout the following days. The specifications for cold weather protection are being met on the project.”

They also running heaters on the ground to keep it from freezing, he said.

“We are keeping the concrete within the specifications for cold weather paving by any means needed,” Goodall said.

The construction work is happening later in the season because the projects were delayed in September when the Michigan Infrastructure and Transportation Association instituted a work stoppage after multiple failed attempts to bargain a new contract with the Operating Engineers Local 324. A prior, five-year deal expired in June.

The construction rift prompted the shutdown or partial halt of 89 Michigan Department of Transportation projects and 75 local projects.

“So among other things, the inspectors will ensure the heating and housing is correct,” he said. “Ultimately, the contractor is responsible for the work completed, and a job is not accepted until MDOT engineers are confident in the quality.”

And so far, Operating Engineers 324 spokesman Dan McKernan said he has not heard any complaints from contractors about corners being cut to get the jobs done.

“Certainly, there is frustration from the workers for having to work through the winter when it didn’t have to be this way,” McKernan said. “But I talked to the agent who oversees the road workers, and there haven’t been any complaints. At the end of the day, MDOT oversees everything, and they are very strict.”

The American Concrete Institute recommends specific measures in its “Guide to Cold Weather Concreting,” noting that “the necessary degree of protection increases as the ambient temperature decreases.”

Cold weather concreting “results in extra costs because of potentially lower worker productivity and additional needed products such as insulating blankets, tarping and heaters.” But it adds that these measures also most likely will allow a project to stay on schedule.

Detroit averages highs of 36.1 degrees and lows of 24.1 degrees in December, according to date from the National Weather Service in White Lake Township.

Daniel DeGraaf, executive director of the Michigan Concrete Association, said placing heaters is a major element of keeping the ground warm. A hydronic heater is used to heat frozen ground or concrete surfaces by pumping heated fluid through closed-circulation tubing and a heat exchanger.

“The ground cannot be frozen when building a road on top of it,” he said. “It can be very expensive.”

He presented an analogy.

“Imagine running a furnace with the doors and windows wide open,” he said. “Not only do they have to heat the ground, but you can’t go as far with the work as you can on a fall day because you’re limited by how far the equipment can stretch.”

Meanwhile, Cranson said state inspectors will hold contractors accountable for the quality of the concrete.

“All materials must meet specifications,” Cranson said. “Inspection to ensure specification compliance; and enforcement based on significant research and testing.”

But Cranson acknowledged risks when concrete is worked on in the winter.

He released details that noted: “The top couple inches (estimated) of the concrete below the exposed surface could potentially act as a sacrificial layer, protecting the inner concrete mass from frost-related structural damage. But, if not protected from the cold weather exposure, this top exposed surface could undergo irreversible damage as it freezes. Over time, this damaged concrete surface will erode and scale away, ultimately resulting in loss of the pavement surface.”

Additionally, the details noted, “Placing concrete pavement on a frozen base could result in significant loss in structural support as the base begins to thaw in the spring. As the base freezes, the moisture within it will expand, thus, causing the base to heave up (water expands approximately nine percent in volume as it freezes). When the base thaws, it returns to its original elevation. This will, in turn, take the pavement downward with it. “

Cranson summed up the lengths being taken to ensure quality work on roads during the winter by saying: “Contractors and the MDOT engineers overseeing their work continue to work very hard to ensure a commitment to quality while they also work as quickly as possible to make travel lanes accessible to the public.

“It is a difficult balancing act in ideal conditions, let alone in inclement weather. Please keep in mind that the people fixing and building our roads are our sisters, brothers, friends and neighbors.”