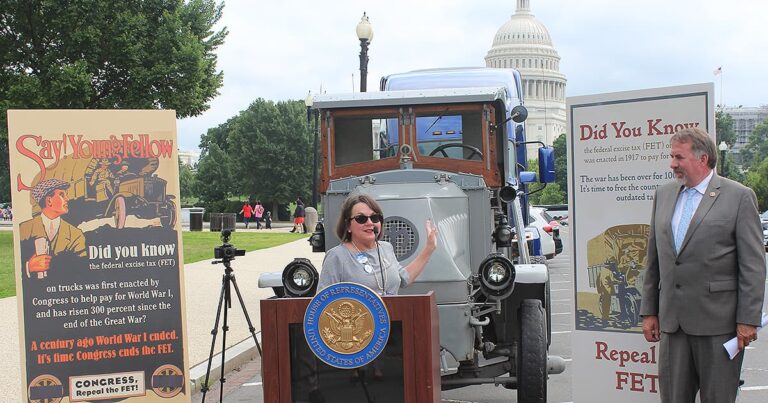 “The FET was first enacted to help pay for World War I,” said Jodie Teuton, chairwoman of the American Truck Dealers (ATD). “This tax may have made sense in 1917, but today the FET delays heavy-duty truck fleet turnover by adding more than $20,000 to the average price of a new truck.” Her remarks were made during a press conference held as part of Modernize the Truck Fleet Week June 17-21.

A national network of commercial truck dealers, trade association executives and trucking industry stakeholders are in Washington this week to meet with members of Congress to urge them to cosponsor H.R. 2381 and S. 1839, bills that would repeal the FET and encourage the deployment of the newest trucks and trailers.

“The FET made sense when it was implemented 100 years ago, but just like trucks that were designed in 1917, it’s no longer viable in the modern world. Today, it’s a cost-prohibitive barrier for small businesses looking to upgrade their outdated trucks to safer, cleaner, more modern vehicles,” said Rep. Doug LaMalfa, R-Calif., sponsor of H.R. 2381, a bill to repeal the FET.

“The average age of most heavy-duty trucks on the road today is nearly 10 years old – that means a decade worth of technological advancements is effectively being sidelined. The 12% FET limits truck replacement by discouraging truck owners from upgrading their outdated vehicles – leading to higher emissions and more dangerous roads. We won’t truly see a modern truck fleet in the U.S. until it’s repealed,” LaMalfa said.

Sen. Cory Gardner, R-Colo., sponsor of S. 1839, the Senate FET repeal bill, said, “This burdensome tax creates excessive costs that are passed on to truckers, who play an essential role in maintaining our nation’s economy. I was happy to introduce legislation to repeal it.”

“With an infrastructure bill as likely to pass as any piece of legislation this Congress, this is the time to put all of our combined energy into finding a way to replace the onerous FET,” said Jake Jacoby, TRALA president and CEO. “We are excited to be a part of such a collaborative effort working with truck companies, manufacturers, dealers and end users who all want to put the cleanest, most technologically advanced trucks onto our highways immediately.”

Gwendolyn Brown, NTDA president, said the FET is an unfair method of taxing the trailer industry, and it limits the purchase of newer, safer and greener trailers and parts — all of which are boons to the economy.

“As increasing regulatory burdens are mandated by the EPA, CARB and other government agencies, the costs of heavy-duty trucks and trailers continue to increase making the FET that much more burdensome,” Brown said.

“Repealing the FET and replacing it with a tax based on road use paid over the life of a vehicle is part of that solution,” she said. “The FET is an indiscriminate, upfront tax. It makes no sense that a truck which drives 15,000 miles a year pays the same tax as a truck driven 150,000 miles.”

At the press conference, Volvo Trucks North America, a member of the MTF coalition, displayed a World War I-era truck and a new Mack Anthem.

“There is an opportunity, right now, to modernize the nation’s infrastructure, modernize the truck fleet and modernize the Highway Trust Fund,” Teuton said. “Repeal of the FET means more trucks rolling on our nation’s highways that are cleaner and safer.”

So if you’re going to be fair, implement a lower fet rate for all truck sales.
Don’t need to penalize those of us who buy a new truck every few years versus those only buy used and never pay that 12%