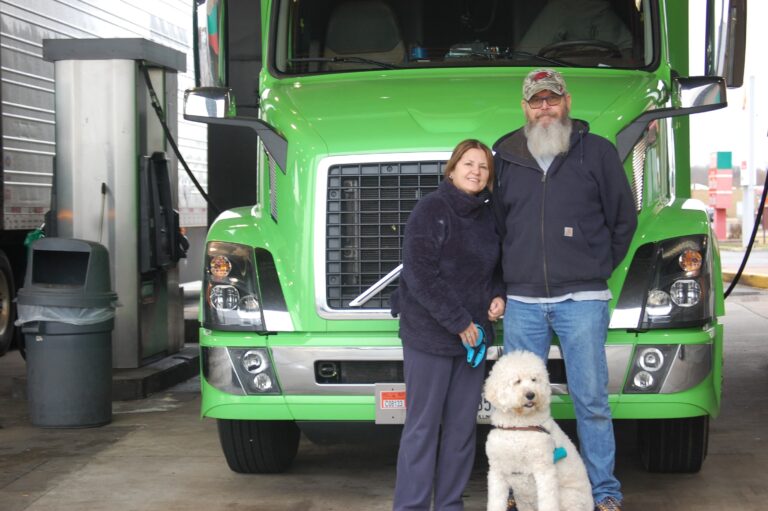 The 2-year-old golden doodle (golden retriever and poodle mix) gets to ride around in style in a spring green 2017 Volvo, peering down at other dogs and motorists below while the scenery outside the window goes whooshing past.

And the truck stops are full of enticing smells and people who pay attention to Charlie.

In fact, Charlie couldn’t wait to be petted by a passing reporter, who was immediately taken in by his big brown eyes and happy face.

Brenda and Jim raised two daughters and after both were grown and left home, husband Jim told her it was time to come with him on the road.

Brenda decided she would have to learn to drive an 18-wheeler. Otherwise, the trips would be too boring.

She was a registered nurse for a short time but decided that job wasn’t for her.

“She empathized with her patients too much,” Jim Harris said.

Brenda said some of her friends in nursing liked their job more the more critical the situation became, but not her. It was too much pressure and compared with nursing, driving an 18-wheeler easy, she said.

The couple haul military freight in their pristine green Volvo and were headed for Chicago when The Trucker caught up with them and Charlie.

Charlie almost missed out on the trucking life, having belonged to one of the Harris’ daughters. He stayed home a lot because the grandkids were involved in sports, which entailed a lot of shuttling kids from school to basketball games and back home.

The family was going to give Charlie away when grandma Brenda intervened and suggested she and Jim try to make a bona fide trucker out of Charlie.

But with six months on the road under his collar, Charlie loves being up in the cab and Brenda said the swaying motion relaxes Charlie and often puts him to sleep.

Unlike a few truckers, Charlie doesn’t bite and takes readily to most strangers. He’s also broad-minded and welcomes all types of folks, even cat owners.

And although still a relative newbie to trucking, Charlie is attentive to what his human sidekicks do and watches their every move. Plus, he seems to love being in on all the action instead of staying home by himself.

His owners couldn’t be more pleased with their four-legged traveling companion.

Brenda, herself, has been driving now some 40 years and said, “I love it. I wouldn’t do anything else.”

It seems Charlie has taken to the trucking lifestyle in like manner. But of course, the people in his life make all the difference.

As humorist Josh Billings once said: “A dog is the only thing on earth that loves you more than he loves himself.”