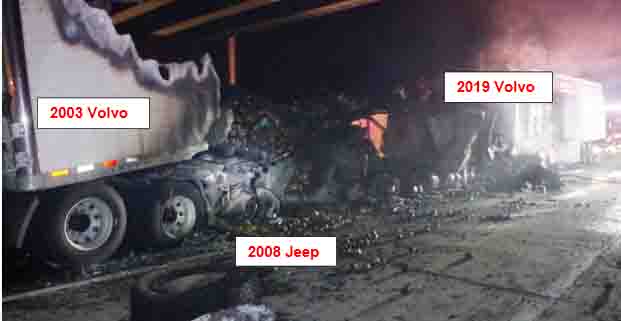 WASHINGTON — The National Transportation Safety Board Friday said in a preliminary report that the driver of a tractor-trailer failed to stop when the big rig crash into the rear of a traffic queue on Interstate 84 near Boise, Idaho, June 16.

Four people, including the driver of the tractor-trailer died in the accident, which occurred about 11:32 p.m. within the eastbound traffic lanes near milepost 46.9.

The NTSB said in the area of the accident, the roadway consists of four travel lanes and paved shoulders for both the eastbound and westbound lanes, but that the time of the crash, I-84 east had been reduced from four lanes to one lane about 1 mile beyond the crash location because of an ongoing maintenance project near the Cloverdale overpass.

The posted 65-mph speed limit was reduced to 55 mph for the work zone.

On I-84 east, a traffic queue had formed in the second to the right lane and a 2008 Jeep Wrangler was located at the end of the queue.

Meanwhile, a 2019 Volvo truck-tractor in combination with a 2015 Great Dane refrigerated semitrailer was approaching the end of the traffic queue from the west.

The driver did not react to the stopped traffic in the queue and collided with the rear of the Jeep. As both vehicles moved forward, the Jeep was pushed into the rear of a 2003 Volvo truck-tractor in combination with a 2008 Great Dane refrigerated semitrailer, which was stopped in front of the Jeep.

The 2003 Volvo combination vehicle moved forward and collided with the rear of a 2006 Ford Fusion, pushing it into the rear of a 2014 Ford F150 and sideswiping a 2015 Ford Escape.

Debris from the collision also damaged a 2010 Ford Focus. The vehicles came to rest on I-84 under the Cloverdale overpass.

A post-crash fire consumed the Jeep and the 2003 and 2019 Volvo combination vehicles.

The fire also damaged other vehicles and the Cloverdale overpass.

The occupants of the other involved vehicles were uninjured.

According to data obtained from an aftermarket on -board Garmin unit, which recorded vehicle speed, interior audio, and forward-facing video when triggered, the 2019 Volvo was traveling approximately 62 mph at the time of impact with the Jeep.

The investigation into the accident is continuing, the NTSB said.