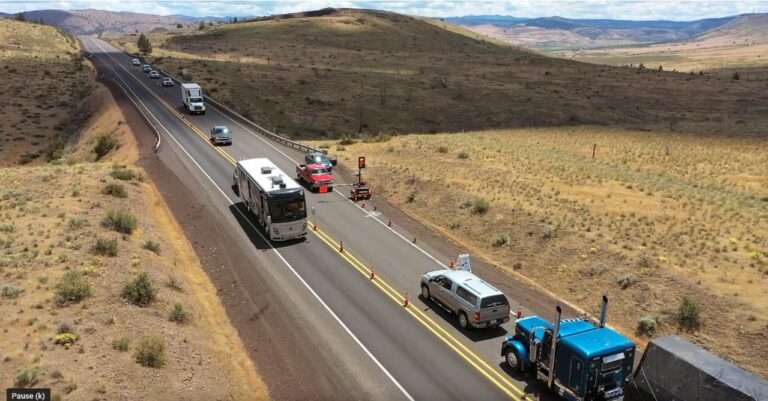 SALEM, Ore. — Every year flaggers and other highway workers are injured and killed on highways in Oregon and across the nation.

The Oregon Department of Transportation has begun deploying new flagging technology — auto flaggers — that takes work zone flaggers out of the line of traffic making them safer.

An auto flagger is a device with lights and a flagging arm. Auto flaggers are more visible to drivers than traditional flaggers and allow a person to operate the device at a safe distance from traffic, the ODOT said in a news release.

A flagger still operates the auto flagger. They’re just outside the line of traffic and away from the hazards of oncoming vehicles approaching the work zone.

ODOT officials shared with motorists what to do when they see an auto flagger:

To see how the auto flaggers work, click here.

“Everyone knows what the red light means,” Rolon Williams, ODOT Transportation maintenance manager. “In every country in the world, red means stop.”

Williams said distracted drivers endanger themselves, highway workers and others. Ninety percent of Oregon work zone crashes are caused by bad driving such as drivers following too close, driving too fast, not yielding or driving under the influence.

“Please be patient and remember, highway crews are working to create a safer, more efficient transportation system for all of us,” Williams said. Pay attention to work zone signs. Slow down in work zones and obey all flaggers.”