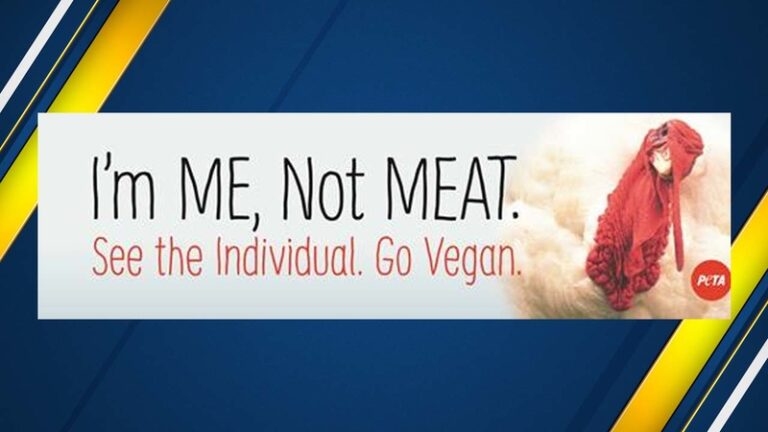 MERCED, Calif. — People for the Ethical Treatment of Animals, or better known as PETA, said the organization would be putting up a billboard at the site of a crash that killed dozens of turkeys in Merced.

The billboard will show a turkey’s face next to the words “I’m ME, Not MEAT. See the Individual. Go Vegan.”

Fresno, California, television station KFSN reported that on August 21 a Foster Farms truck overturned near the Mission Avenue exit on Highway 99. The driver of the truck suffered minor injuries and dozens of birds died in the crash. The Highway Patrol said witnesses at the scene reported seeing a blue Honda hit the side of the truck, causing the driver of the turkey truck to veer off the roadway.

“Yet another Foster Farms truck crash has left countless birds dead or mangled, and any survivors were presumably shipped off to the slaughterhouse,” said PETA Executive Vice President Tracy Reiman. “PETA’s billboard would remind everyone that the single best way to prevent these horrific accidents is to keep turkeys off the road in the first place by going vegan.”

According to PETA, this is the second Foster Farms truck accident this summer and PETA also says more than 50 crashes involving animal transport trucks in the U.S.

That site is run by a front group for the meat industry, which has long tried to smear PETA and other animal protection groups in an attempt to distract from the real issues. See http://www.petakillsanimalsscam.com/. Unlike the industries this group represents–which kill animals painfully, so they can make money by selling their flesh–PETA is a shelter of last resort for animals who need euthanasia to end their suffering (many of whom have been rejected by other facilities because euthanizing them would make their “numbers” look bad). Please watch this short video to see some of the animals PETA has helped in its community: https://www.youtube.com/watch?v=EG0sh6rpC14.

I hope this makes people think more about turkeys. They feel pain, grief, love, and joy, just as humans do. And yet they’re transported to the slaughterhouse, where they’re shackled upside-down, their throats are slit, and many are scalded alive. There’s nothing anyone can do to bring back the birds who died in the crash, but we can all help other turkeys just by choosing vegan foods.

I agree with this billboard. Is it really too much to ask people to take a moment to think about WHO is on their plate, not what?