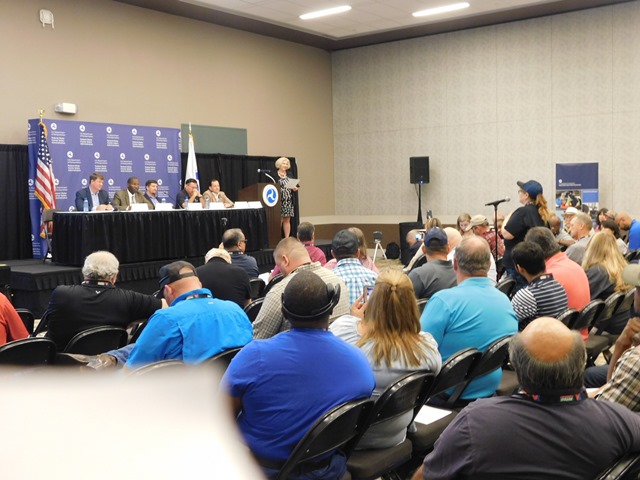 At events like the Great American Trucking Show (GATS), the line between work and play is intentionally blurred. It’s an industry trade show dressed up like a carnival. There are seminars and country music, entertainment and opportunity. You can look for new equipment or a new job, or you can look at all the tricked-out trucks and pretty girls.

On Friday, August 25, the second day of this year’s GATS, while the action on the convention floor was in full swing, a conference room one flight below was packed with GATS attendees who took time from the frivolity for some serious business. A contingent from the Federal Motor Carrier Safety Administration  was conducting a listening session.

Three days earlier, the FMCSA had announced it was issuing an Advance Notice of Proposed Rulemaking (ANPRM) as the first step toward possibly making changes to the Hours of Service regulations, and it was opening a 30-day comment period for all interested parties to voice their thoughts and opinions and to share with the agency any relevant data on how revisions to the current regulations could alleviate unnecessary constraints on drivers while maintaining or even possibly improving safety.

The session at GATS was the first of a series of planned in-person forums on the matter. FMCSA Administrator Ray Martinez came out to lead the session. A few hours prior to the session, he spoke with reporters about the ANPRM and his intention to keep this on the fast track.

“We want to move this along on a fast track. I think we’re at a critical moment here. It’s been 15 years since Hours of Service has been seriously addressed. This is a critical, possibly pivotal moment.”

The conditions under which drivers operate have changed since HOS was introduced, Martinez explained. Highway congestion has increased, but at the same time the push is on for ever-faster delivery.

“It’s also a very healthy time for the industry,” he said, and there’s a need to make sure drivers’ time can be utilized both safely and efficiently.

The ANPRM lays out possible changes to four areas of HOS:

“These are the things we’re hearing when talking with drivers and carriers,” Martinez said.

What’s important at this stage, Martinez said, is that the agency gets the feedback it needs to move forward.

“Give us the information you think would be relevant to making a decision – and this is critical – whether we move forward with this ANPRM. And if we do, what we would include in it and why.”

Martinez emphasized the word “whether,” he explained, because he wants to make sure people don’t assume that now that the process has begun that these changes are a done deal.

“It only happens if there’s participation and good information is provided,” he said.

As much as everyone would like to see changes as quickly as possible, he said, there is no “magic wand” for government regulations. There’s a step-by-step process.

“It starts by listening informally and then taking it through the regulatory process,” he said.

In particular, he said, last year’s runup to the ELD mandate put HOS under a more intense microscope, and the hope is that carriers, associations or universities that have compiled data that can shed some light on these particular issues will share it.

From the FMCSA’s perspective, he said, the key to considering making these changes to HOS must be done “through the lens of safety.”

“This is a great opportunity to leverage what you’re getting,” he said. “Anything that can educate us about this would be helpful.

“I say ‘educate.’ Obviously, we’re familiar with the issues, but this is the opportunity for the broader public to comment.”

Martinez said he came to this session in part because he likes to hear directly from the people he serves. But he also wanted to emphasize the agency is committed to moving on this as quickly as the process will allow, and that FMCSA is genuinely interested in hearing from as wide a swath of the trucking community as possible.

The conference room at the Kay Bailey Hutchison Convention Center could barely contain the sampling of the trucking community who wanted to sit in on this initial listening session, which lasted about 90 minutes with nearly two dozen getting up to say their piece before the FMCSA panel.

FMCSA expects to have three more listening sessions. The first will be held September 14 at Department of Transportation headquarters in Washington, D.C. Others are tentatively planned to take place on the West Coast and southern East Coast.

The ANPRM can also be viewed and comments left at https://www.fmcsa.dot.gov/regulations/hours-service-advanced-notice-proposed-rulemaking

As of Wednesday morning, the site had received more than 900 comments.

lets go back 20 years when i could manage my own sleep and not a machine that has no idea of who i am or what i have been doing all day if send 3 to 4 hours in a dock I am laying down resting or sleeping as it stands now i get to me drop at 11pm and my appt is for 9am i normally put myself in the sleeper when i get their meanwhile when i set my brakes the firs thing i actually do is walk around my truck and trailer bump the tires and generally inspect my unit that takes maybe 10 minutes then i go and get something out of the fridge to eat while my tv is scanning for local channels then i lay down its now 12:30 am i might fall asleep in 15 min to an hour depending on how traffic was getting to my drop if it was heavy and lots of tight turns it may take me two to three hrs to wind down the ELD has no idea of where i am at mentally if im wound up or relaxed i have been driving for 30+ years we used to be able to do 5 on 5 off 5 on 5 off never getting to stressed out now we play beat the clock if you look at the stats their were less fatigue related incidents the than now one other question how are people getting their CDL if they cant speak English i see this at fuel desks and loading and unloading points all over this is wrong!!!!!!!!!!!