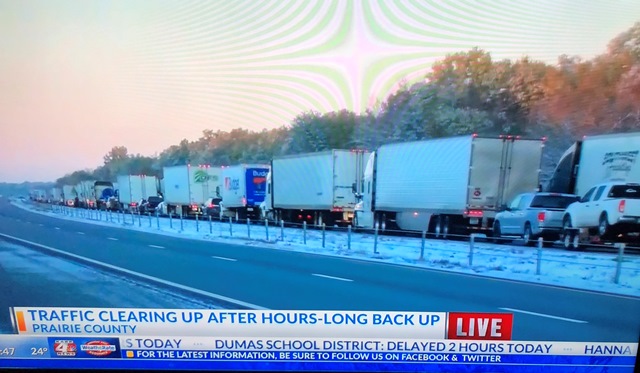 BRINKLEY, Ark. — Did you ever get a wake-up — er, rap on the  window — call  from a highway police officer?

Numerous professional truck drivers did Thursday morning after spending the night on Interstate 40 about halfway between Little Rock, Arkansas, and Memphis, Tennessee.

The culprit was an unusual mid-November storm that dumped up to 2 inches of snow in parts of eastern Arkansas Wednesday afternoon and evening, resulting in numerous wrecks, including pile-ups in the westbound lanes of the White River bridge that caused a back-up of traffic on I-40 that stretched over 30 miles from the bridge to near Palestine, Arkansas.

Police said after it became apparent that the road was going to be closed for hours upon end, many drivers retreated to their sleeper berths.

At 6:30 a.m. Thursday, the back-up stretched from mile marker 205 (five miles east of the bridge) to mile marker 233 at Palestine.

By 8 a.m., traffic was beginning to return to normal.

Brinkley, Arkansas, is located about 63 miles east of Little Rock.