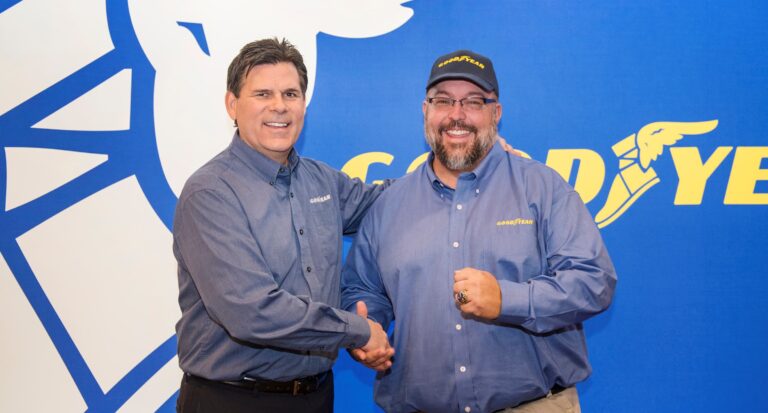 LOUISVILLE, Ky. — For most people who attended the first day of the 2019 Mid-America Trucking Show, March 28, the show ended at 6 p.m. But for a few dozen, the celebration simply moved from the Kentucky Exposition Center about a half mile away to the Crowne Plaza Louisville Airport Hotel for a ceremony that has long been associated with the show.

Since its inception in 1983, The Goodyear Tire and Rubber Company has honored truck drivers who put themselves in harm’s way to help others with its Highway Hero Award. In keeping with the tradition, the three finalists for this year’s award were brought together so they could all be honored and their stories told.

Medalis said as he was anticipating this year’s award, he started thinking about what it means to be a hero. The dictionary says it’s a person who is “admired for great or brave acts,” he said. In its 36 years, the drivers who’ve been recognized by Highway Hero Award have proven that heroism can take many forms and assert itself in many situations, he added, and the trio who’d been selected the 2019 nominees certainly add to the definition of heroism.

Prior to the ceremony, The Trucker spoke with each of the nominees.

The first was Darrell Atkins, a professional truck driver for 27 years, Atkins has been with JB Hunt for the past 19 years and was expecting to reach the 2 million-mile mark sometime in mid-April.

The incident for which Atkins was nominated happened one morning while he was driving a load in Arizona. He recalled he’d changed lanes to let a car onto the highway, and how the elderly couple inside waved at him as they passed him and then pulled in front of a bus.

About 5 miles down the road, he said, the vehicle reappeared from in front of the bus, careening off into the median, where it landed on its roof.

The bus stopped, and so did Atkins. The bus had somehow clipped the vehicle. Atkins went over to the vehicle, but he couldn’t see the people inside because the side airbags had deployed. He knocked on the window and got their attention and got them to unlock their doors. Atkins said he opened the driver side, where the woman was hanging upside down, still strapped to her seat.

Another motorist came and helped, and they got the woman and her two dogs out. Then Atkins went over to get the man, who was lying on his back on the roof of the inverted vehicle.

The man tried to roll out but was in pain. Atkins asked him breathe in and out a few times, and when there was no gurgling sound he knew the man didn’t have a punctured lung and was safe to move. Once he got the couple together a safe distance from the vehicle, they told him there was a third dog in a carrier. He went back, found the carrier and opened it to find their shih tzu, “And when I opened that crate, you know that little Tasmanian Devil come out of there and bit me, like, five times before I could get it back in the crate.”

Atkins said after emergency personnel arrived and he told the couple he had to get on his way, the wife said, “Young man, be careful out there, the roads are dangerous.”

“I thought, wow, she’s just been in this accident, and she’s worried about me.”

The next nominee, Don Frederick, of Kimbolton, Ohio, drives for XPO Logistics.  It was about 11:30 a.m. one morning, Frederick recalled, and he was near the little town of New Athens, Ohio, near the West Virginia state line. He was riding a familiar road, one that he described as “a goat path – real winding.” He was behind a coal truck, common in that area, for a few miles. Frederick said he was giving the coal truck some distance. After passing through New Athens, they got to a hairpin curve.

“I didn’t really think he was going that fast, but you could see the coal was in the back of the truck instead of in the center,” Frederick said. “And he got it in that turn and snapped it and over it went.”

“I could see him fumbling around in the cab,” Frederick said. The man had a severe laceration to the forehead. Frederick was able to remove the seal and pull out the rear window. He was able to reach in and turn the engine off then he managed to get the driver out. The man was bleeding from the neck and arm even more so than he was from the head.

“I remember when the paramedics got there, him telling them that he was on blood thinners,” Frederick said.

Before the paramedics got there, Frederick laid the coal truck driver down, put his feet up and applied pressure to his wounds. A former Marine, Frederick is also an outdoorsman and hunter, and to him part of that means knowing some first aid.

They were in a pretty rural area, Frederick said, but the paramedics got there fairly quickly and took over. He tried to follow up, but he never has been able to find out how that coal truck driver fared.

The third finalist, Paul Mathias, a driver for System Transport, was in his hometown of Phoenix, starting his workday one morning, when he stopped at a red light.

At the hotel ceremony, Medalis announced Mathias had been selected the Goodyear’s Highway Hero for 2019. As he accepted the commemorative ring that was part of his prize package, Mathias said he hoped this award and the stories of himself and his fellow nominees would inspire others to help others when they see someone in need. “That’s what we’re here for, to help each other.”