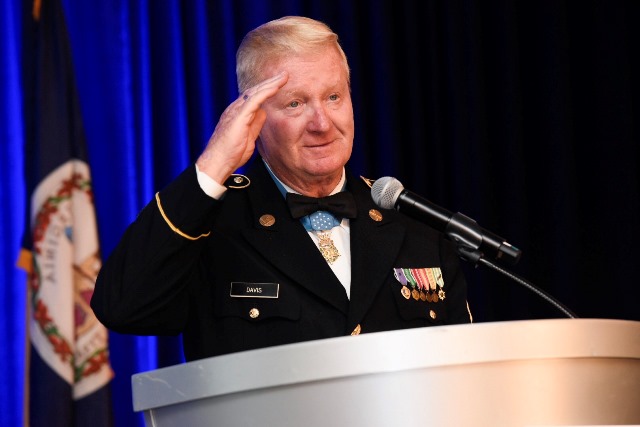 ARLINGTON, Va. — More than $80,000 was raised September 26 as the Truckload Carriers Association hosted its sixth annual fundraising gala in support of Wreaths Across America (WAA) at the Crystal Gateway Marriott here. More than 230 attendees — trucking executives, industry suppliers, military families, and members of the press — attended.

New this year, WAA hosted its 2018 Virtual Convoy in conjunction with the gala. The event was broadcast live to hundreds of thousands of social media followers encouraging viewers to help fill a trailer with wreaths; the fundraiser was quite successful with $15,000 collected.

The funds will support logistics for the delivery of two million fresh remembrance wreaths which will adorn veterans’ gravestones on National Wreaths Across America Day on December 15.

“Each December, hundreds of TCA members are proud to haul a truckload of respect,” said TCA’s President John Lyboldt. “Tonight, we celebrated this great industry and its passion to help advance Wreaths Across America’s mission of Remember, Honor, Teach.”

Before concluding his speech, Davis played “Shenandoah” on a harmonica which was auctioned off at the event; a $3,500 donation to the transportation fund.

Also during the event, Morrill, Karen and Rob Worcester thanked the trucking industry for their continued support and shared new logistics information. The Worcester’s encouraged American Gold Star Mothers in the audience to join them onstage to share their son or daughter’s name, rank, and date of death.

During the reception, attendees had the opportunity to purchase exclusive, marble holiday ornaments as well as truck decals to showcase their involvement in and support for WAA. Guests were also encouraged to have a professional photo taken.

Throughout the evening, attendees could place bids on more than a dozen silent auction items ranging from getaway packages to a Tiffany & Co. crystal decanter to an American flag which was flown over the U.S. Capitol on September 11, 2018.

The gala was held in conjunction with TCA’s Fall Business Meetings and Second Annual Call on Washington.

For more information about Wreaths Across America, or to haul a truckload of wreaths this December, visit www.WreathsAcrossAmerica.org. Search the hashtag #WAA2018 on social media networks to learn more about this year’s wreath-laying events. 8