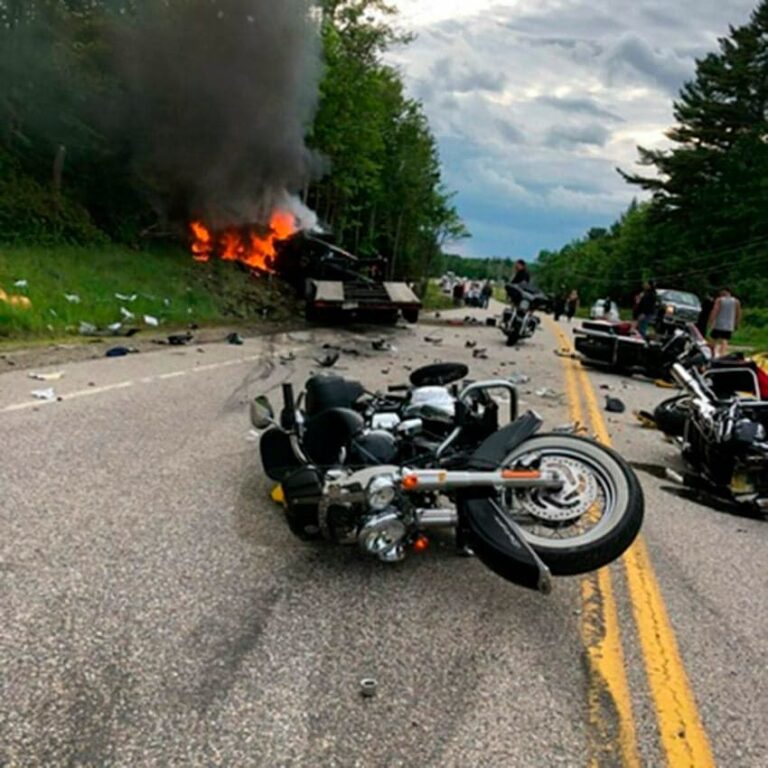 Seven motorcyclists are dead, a trucker has pleaded guilty to negligent homicide, a Massachusetts trucking company is under investigation and the head of the Massachusetts Registry of Motor Vehicles after her agency failed to terminate the commercial drivers license of the truck driver in the wake of a horrific accident involving a pickup truck pulling a flatbed trailer of automobiles and a group of motorcyclists who were members of Marine JarHeads MC, a motorcycle club that includes Marines and their spouses.

The pickup collided with the motorcycles late June 21.  The trucker, 23-year-old Volodymyr Zhukovskyy, was driving erratically and crossed the center line, according to criminal complaints.

His truck-trailer was classified as a large truck because of the combined weight of the units, federal authorities said.

The tragedy sent shockwaves through New England’s communities of motorcyclists and military veterans, which often overlap.

Zhukovskyy was employed by Westfield Transport of West Springfield, Massachusetts.

Since the crash, The Associated Press said it has emerged that Zhukovskyy had multiple run-ins with the law. Westfield Transport also has a troubled history.

According to an AP analysis of Federal Motor Carrier Safety Administration data, Westfield Transport has faced over 60 violations over the last 24 months. About one in five inspections of its vehicles ended with federal investigators issuing temporary orders saying the carrier was not authorized to operate. The company’s out-of-service rate is 20.8% — a figure nearly four times greater than the national average of 5.5%.

Federal records show the company has faced seven violations for unsafe driving, which include speeding in March 2018. That same month, the company faced two violations reported in Massachusetts and Vermont of drivers who were in possession of a narcotic drug or amphetamine.

The company also received 11 other violations related to the fitness of its drivers, including an April violation for driving without a commercial driver’s license. Vehicle violations included inoperable head lamps in April and defective brakes in March.

One driver was put out-of-service for driving while disqualified.

There were 14 Hours of Service violations, including three for having no ELD and two for false reports of drivers of record duty status.

At first, some thought Zhukovskyy might have been driving illegally because a prior incident where he was charged with being intoxicated, which should have required that his CDL be revoked or suspended. However, even though the combined weight of the truck and trailer resulted in it being classified as a large truck, because that weight was under 26,001 pounds, it did not require the driver possess a CDL.

Connecticut prosecutors said Zhukovskyy was arrested May 11 in a Walmart parking lot in East Windsor, New Hampshire, after failing a sobriety test. Zhukovskyy’s lawyer in that case, John O’Brien, said he denies being intoxicated and will fight the charge.

Pollack said the arrest should have cost him his commercial driving license. As a result, she accepted the resignation of Erin Deveney, head of the Massachusetts motor vehicle division.

Massachusetts Gov. Charlie Baker said there is no question that the Registry of Motor Vehicles failed to act as it was required to prior to that incident.

“My administration’s review has revealed a broader need to strengthen the commonwealth’s law regulating commercial driver’s licenses to ensure that only safe and qualified drivers are authorized to operate the largest vehicles on our road.”

Officials said there were stacks of documents lying around the registry offices that had not been processed.

Zhukovskyy also has a history of traffic arrests besides the May 11 arrest.

U.S. Immigration and Customs Enforcement is taking steps to ensure Zhukovskyy remains in custody even if his criminal case were to be dismissed. It would not say why it was targeting Zhukovskyy, who is a permanent resident according to his father. A message was left with Melissa Davis, a public defender for Zhukovskyy.

“It’s so preventable. It’s so unnecessary,” said Harry Adler, executive director of the Truck Safety Coalition, an advocacy group calling for more federal action on passing stricter truck safety regulations. “When you have these repeated violations, it speaks to the company’s commitment of being a safe operator on the road.”

But in a brief interview with NECN-TV the company’s owner, Dartanyan Gasanov, called the crash a “horrible accident.” He refused to address questions about Zhukovskyy, who had been on the job only three days. He said the company is cooperating with investigators.

Please stop referring to him as a “trucker”. He was a guy driving a pickup hauling a trailer.As a retired real trucker it always bothers me when someone involved in an accident driving a pickup is referred to as a truck driver. It tarnishes the reputation of those of us who work hard too maintain our professionalism.

I agree with you Luke. I also wish the age of the driver had been stated in this article with the ATA pushing to allow 18 to 21 year olds to drive interstate and his picture makes him look young. Maybe instead of younger drivers and speed limiters we should mandate better compensation packages to attract more mature and experienced TRUCKERS and thin the herd of steering wheel holders.

I’m with you all they keep referring to him as a trucker people will automatically thing big truck just like they did in KY when that pick up truck hit that school bus year’s ago.