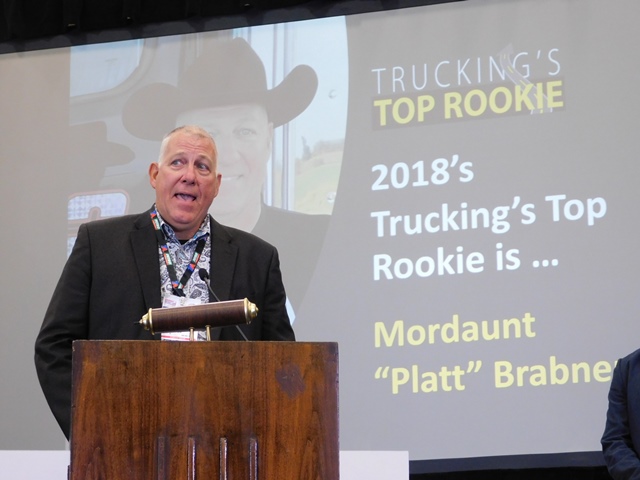 Which is better, youthful drive or age and experience? Clearly, the best case would be for someone to have both qualities – someone who has left a trail of accomplishments in his wake and still takes on new challenges with persistent discipline, confidence and a personal commitment to excellence.

Qualities like that would be appreciated anywhere, but in an industry like trucking that is facing an acute labor shortage, they need to be celebrated when they come along.

That was the idea back in 2010 when Mike O’Connell, the former executive director of the Commercial Vehicle Training Association (CVTA), came up with an idea for an event that would recognize the industry’s top newcomers. The result was the award that bears his name, the Mike O’Connell Trucking’s Top Rookie award.

The contest is open each year to any CDL holder who has graduated from a Professional Truck Driver Institute (PTDI)-certified training school or a CVTA- or National association of Publicly Funded Truck Driving Schools-member training school within the previous year and has been employed by a trucking company for less than one year.

The annual announcement of Trucking’s Top Rookie has become one of the highlights of the Great American Trucking Show (GATS).

The word “rookie” conjures up images of someone barely acquainted with adulthood, someone fresh-faced and eager. But on August 24, the second day of the 2018 edition of GATS, as Seth Becker, director of media sales for show sponsor Randall-Reilly, introduced the nine finalists for this year’s award and their names and photos appeared on two large screens, it didn’t look likely that any of any of these rookies has had to flash an ID to prove they’re over 21 any time recently.

At 58, his closely cropped hair more salt than pepper, Mordaunt “Platt” Brabner looks more like the wise old mentor who would take the wide-eyed rookie under his wing.

Nonetheless, after Becker got a brief, improvised drumroll from the large crowd that had gathered around the GATS America Strong Stage, it was Brabner’s name that was called as this year’s top rookie.

According to the introduction given at the award presentation, Brabner, who drives flatbed for TMC Transportation, logged 120,000 miles in his rookie year. That pales in comparison to the long road that brought him to trucking.

Born and raised in Alabama, Brabner enlisted in the Marine Corps in his 20s. He began his military career as an advanced electronics technician, and while serving earned bachelor’s degrees in professional aeronautics and electronic engineering.

Determined to fly, his commanding officer allowed him to test for the Navy’s flight program, where he excelled. During assignments in Southeast Asia, he carried out aircraft carrier combat operations, performing over 650 carrier landings.

During his military career, he also served in the Middle East, Germany and Africa. In 2003, he was promoted to the rank of Navy Commander.

Brabner’s wife, Vonda, was fully supportive of his career. But he had been at it 27 years, and he felt she needed the opportunity to fully pursue her career as an embryologist. In 2006, he retired from the military. The couple live in Coupland, Texas,  a rural community east of Austin.

Brabner found trucking after earning a master’s degree in business but then bumping into age discrimination. He gave farming a brief try, but decided that wasn’t for him, either. He found his fit in trucking, where he applies his business knowledge and military discipline to the job.

“My goal is to become an owner-operator and to start my own business,” he said.

His trip to GATS this year took him a lot closer to that goal. Being named Trucking’s Top Rookie comes with a $10,000 cash prize, along with a slew of other gifts.

The other Trucking’s Top Rookie finalists, along with their home towns and companies, were:

Earlier that same day, Brabner also found out he is a finalist in the annual Transition in Trucking: Driving for Excellence award, presented by the Fastport Trucking Track Mentoring Program, the U.S. Chamber of Commerce Foundation’s Hiring Our Heroes Program and Kenworth. The award honors the top rookie military veteran who has made a successful transition from active duty to a commercial fleet.

As one of the four finalists, Brabner is guaranteed to be taking home at least another $5,000. The winner, who will be announced at a ceremony December 14 at the U.S. Chamber of Commerce Hall of Flags in Washington, D.C., will win a fully-loaded Kenworth T680 with a 76-inch sleeper and Paccar MX-13 engine, valued at $155,000.