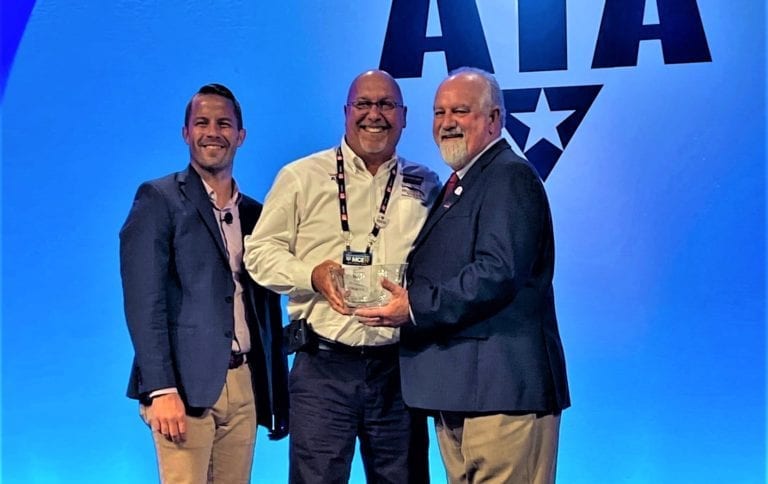 For some, driving a truck professionally is a job. There are good days and bad days, but when the parking brake is on and the key turned off, it’s time to leave it behind and go home.

Then there are drivers like Steve Fields, for whom representing the trucking industry is a round-the-clock proposition. He’s driven 3.3 million miles without an accident in a career spanning 34 years, setting examples for both safety and longevity for other drivers. He’s been with YRC for 22 years and sits on the company’s freight safety committee.

Steve has competed in truck driving championships at state and national level for most of his career. He often shines brightest, however, when he climbs down from the cab. He has served as a captain with America’s Road Team and is still an active participant in the American Trucking Associations’ (ATA’s) Share the Road program. He’s a member of Trucker Buddy. He’s worked with the U.S. Secretary of Transportation in a safety campaign and talked trucking with President Trump at the White House. And, he was the ATA’s choice to receive the 2019 Mike Russell Trucking Image Award, presented at the organization’s Management Conference and Exhibition, October 5-9 in San Diego.

Like many drivers, Fields got his start in trucking at a young age.

“My grandfather drove for TG&Y Stores back in the day,” he said. “I would sometimes ride along in his GMC Astro 95.” Fields has noticed a difference in the way drivers were perceived back then versus how they are seen now. “In my grandfather’s day,” he said, “truck drivers were held in high regard. A lot has changed.”

In his view, the driver is on the front line of the image battle. “The public perceives trucking, as a whole, by the actions of the driver. How you dress, how you act, the language you use all say something about trucking.”

While racking up safe miles, Steve began participating in truck driving championships in his home state of Missouri and nationally. Fields won the Missouri Grand Champion crown in 2003 and was top in the twins category at the nationals in 2011. The competition is fierce, but he enjoys watching and working with the other contestants. “This will be my 28th or 29th year,” he said. “I’ve got a lot of seconds and thirds, but it’s always great to see the talented drivers compete.”

In 2007, he was selected as a captain on ATA’s America’s Road Team, frequently traveling to speak to high school students, drivers and to industry and community groups about driving safely around tractor-trailers.

One of Steve’s favorite assignments is making presentations to teen drivers through ATA’s Share the Road program.

“We talk to high school drivers ed classes about following distances, characteristics of the truck, stopping distances and so on,” Fields said. “Most of them are really surprised that takes more than a football field, including end zones, to stop a truck.”

The instruction includes tips on giving trucks plenty or room, especially passing safely without pulling back in front of the truck too soon.

The visits include some real-world training, as cars are placed in blind spots around the parked truck.

“When they get behind the wheel and close the doors, they can’t see the cars,” he said. “It really opens their eyes.”

Fields is a fan of the latest safety technology, but when asked for the most impactful innovations he’s definitely old school.

“The number one safety improvement is the seat belt,” he said. “Any time you can stay in the vehicle during an accident, your chances are better.”

He’s adamant, however about one thing.

“The safest thing on the truck is the driver,” he said. When he speaks to other drivers, he talks about seat belts.

“I always ask, ‘if you knew that 20 minutes from now you were going to be involved in a rollover accident, would you put your seat belt on?”

On the rare occasions when he’s not behind the wheel or in front of a group, Fields likes camping, motorcycle riding and showing off his hot rod, a ’67 Camaro RS/SS that he enters into local parades and shows. He has a daughter who recently became engaged. “It’ll be an interesting year,” he said.

With drivers like Steve Fields carrying the torch, the industry is well represented to the public, helping promote a return to the high regard earned by past drivers like his grandfather. From the schoolhouse to the  White House, his attitude and professionalism have taken him far beyond a truck driving job.