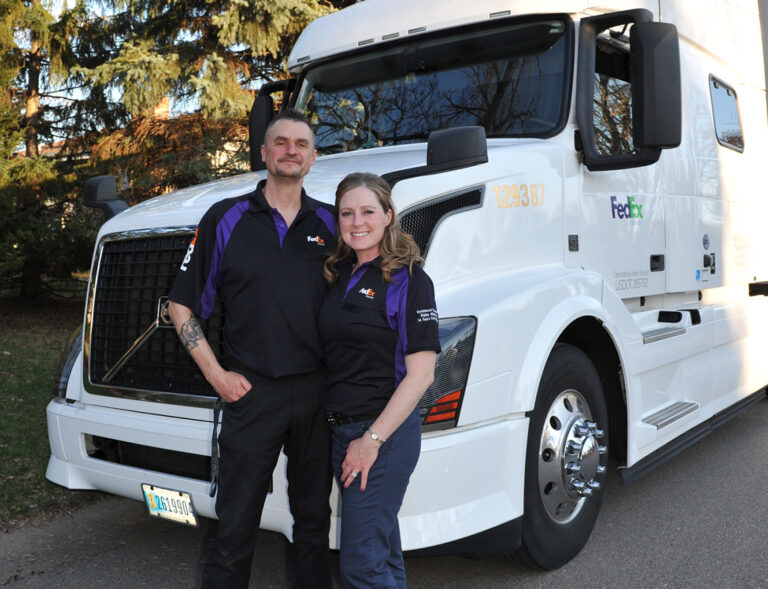 When Trucking Moves America Forward (TMAF) celebrated its fifth anniversary at the 2019 Mid-America Trucking Show in Louisville, Kentucky, owner-operators Dave and Tina Peterson were there to share in the festivities, and the cupcakes.

The couple is featured as one of TMAF’s Trucking Families, helping the organization further its industrywide education and image movement. Their tractor is signed on with Ravenswood Transport, hauling a contract route for FedEx Ground between St. Paul, Minnesota, and Dallas. The Petersons highly value that route, since their home is in a suburb north of Minneapolis.

“It lets us balance work and home life and plan out our lives when we aren’t on the road,” Dave said.

Both Tina and Dave grew up near interstate highways, watching trucks go by and hoping to drive one someday. “Being a child of the ’70s,” Dave said, “I grew up when there were trucks in music, in movies. I was attracted to the independence of the drivers.”

Dave was working as a wrecker operator when he obtained his CDL through a local community college, hoping to find employment with more regular hours. He accepted a job with a carrier that hauled cars to an auto auction facility, and that’s where he met Tina. The relationship blossomed and Dave’s employer agreed that they could work together once Tina obtained her CDL. She graduated from the same program that Dave did, and they’ve been together nearly every mile since then. Both speak highly of community college training schools.

“I think the community college programs provide a better overall learning experience,” Dave said. Tina added that she had been trained in a four-month program, much longer than many private CDL schools.

The couple eventually went to work at Ravenswood and, after a few years, purchased both the truck they were driving and the route they ran to start their own family business. They average a quarter-million team miles per year, hauling package-filled doubles or 53-foot trailers to Dallas and back.

While some drivers are hesitant to drive a route that regularly takes them farther north than Toronto, the Petersons think the southern part of their route is often more challenging.

“People think that when we head for Dallas, we’re heading ‘down South’ to warm weather,” Dave said. “But when you get to Kansas and south, they have ice storms that close everything down. We’re more likely to encounter bad roads on the south end of our trip.”

Tina agreed. “A lot of them don’t have the equipment for plowing and salting that they have in the north and the highways get bad pretty quickly,” she said. The key, she explained, is preparation.

“We’ve driven the route so often, we know which counties prepare quickly for bad weather and which don’t,” she said.

Dave added: “Our company, Ravenswood, is really good about us using our judgment about driving on bad roads. We don’t risk our business or each other’s lives for packages.”

As with any team, dividing the workload makes everything flow smoothly. “I kind of do all the ‘girl’ stuff,’” Tina said, “making sandwiches, preparing meals and keeping the books.”

In exchange, Dave gets the night shift.

“I handle fueling, getting trailers ready and hooked up and so on,” he said. “I’ve been trying to get her to let me do the books, but she’s really picky about decimal points and details like that.” The equal division of work applies to driving, too. “We share the miles equally,” Tina said. “We each have our own duties, but we each drive 510 miles a day, too.”

The team has high praise for the facility that services their truck, Nuss Truck and Equipment in Roseville, Minnesota.

“They know we haul time-sensitive freight and they get us in and out quickly,” Dave said. The couple’s 2014 Volvo 730 has nearly 1.5 million miles on the original engine. Tina feels that’s a testament to the quality of the Volvo engine as well as the great care they receive from Nuss. “These motors run clean and they can really last,” she said.

When the time comes to trade their current truck, they plan to stay with Volvo. “I like the interior layout of the truck, and it’s been really dependable,” Dave said, “also partly because of the relationship we have with the people at Nuss. To have that relationship is priceless.”

When they aren’t running freight, Tina and Dave like to enjoy the Minnesota scenery, which is especially colorful in the fall. Known as “the land of 10,000 lakes,” with streams and rivers that connect many of them, the Petersons have 72 state parks to choose from. Don’t expect a CDL-sized camper, however.

Tina also scrapbooks their activities, and the couple spends a lot of time with her family, who live nearby. There are grandchildren, too, thanks to Dave’s son, Tina’s stepson. Some of the family outings are to historic sites maintained by the Minnesota Historical Society. The couple has purchased memberships for themselves and multiple family members.

The couple also stays busy at another activity they love, promoting the trucking industry. They attend truck shows to represent TMAF, but Tina is also a captain on the American Trucking Association’s America’s Road Team. They recently participated in a “share the road” event at multiple high schools along with “touch a truck” events. “I love those because I can get one-on-one with parents,” Dave said.

Another family member participates in many of the events, “Dixie,” a fawn-colored boxer, is a constant companion and is responsible for more than 4 million burglar-free miles in her 12 years with the Petersons.

Tina and Dave (and Dixie) have worked out a system to maximize their efforts at work, home and at industry events. They plan to continue their work to improve the image of the trucking industry and its drivers for the foreseeable future.