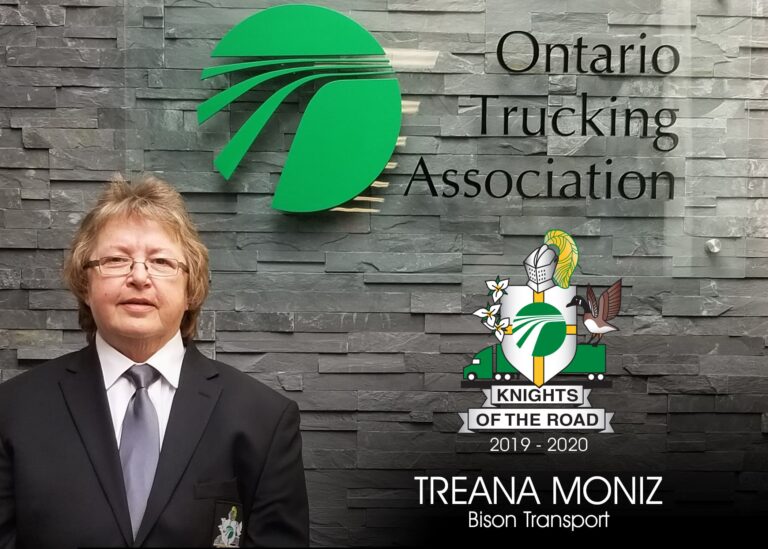 Treana Moniz loves her career as a professional driver. “I can’t think of anything that I’d be interested in doing, outside of trucking,” she said. She spoke with me from the cab of her doily-decorated Freightliner as she approached the Ambassador Bridge from the Detroit side. Since more than 25% of merchandise trade between the U.S. and Canada crosses the bridge, she’s no stranger to the crossing.

Moniz may be the only driver making the crossing with hand-crocheted doilies adorning the seat backs in her cab and another covering her CB radio. They’re a constant reminder of family, mementos hand-made by her late grandmother.

“I like old fashioned stuff,” she said, describing another family heirloom she cherishes. “I’ve got a tablecloth at home that she made for my mother,” she related. “She crocheted some beautiful things.”

Despite the touches of home in her truck, Moniz is all business when it comes to trucking. She’s earned a long list of accolades for her work behind the wheel and out of the cab as well. She’s currently a member of the2019-2020 Ontario Trucking Association’s Road Knights team and was selected as a Women in Trucking 2018 Canadian Image Team Member. She’s racked up several Driver of the Month awards at Winnipeg, Manitoba-based Bison Transport, as well as Eastern Company Driver of the year last year. And, she was Women in Trucking’s choice for May 2019 Member of the Month.

Career drivers often say that trucking is in their blood, and Moniz comes by hers honestly. Her grandfather hauled logs with horse teams and her father drove multiple types of trucks before her. Her grandmother, mother and an aunt all served drivers by working in truck stops as cooks and waitresses. For a while, Treana did too, but the call of the open road was strong. “Waitressing was a job,” she said. “Driving is a career.”

When she met the man who began her driver training, she left the apron and coffee pot behind to learn the trucking business. When the training was interrupted by a her then-boyfriend’s medical condition, she attended CDL school and got her license. After her friend recovered, they teamed together for five years. When that relationship ended, she took her career solo, ending up with Bison Transport after a short stint at another carrier. She’s nearly as passionate about Bison as she is about driving.

“They’re a great company,” she said. “My truck is spec’d for driver comfort, with an electric APU and a big inverter.” The inverter is important, because cooking is another talent of Moniz. “I love cooking,” she said. “I do my own cooking on the road, and when I get home, I’m the chief cook and bottle-washer.”

When she’s not at home cooking for her son, daughter and four grandchildren, she’s representing the industry, Bison and trucking women at events for the OTA, WIT and others. “As a road knight, I’ve been going out to the schools and talking to the kids,” she related. “They may not get into the career, but I hope they’re listening and they learn what women are capable of.”

Some of her educational efforts are to other drivers, too. She recently became a Driver Mentor at Bison, but she doesn’t have to be assigned a student – mentoree to offer help. “I have a lot of newer drivers that talk to me and get my advice,” she explained. “I let drivers know they can talk to me, they can lean on me.” She shares her knowledge with a down-to-earth approach that other drivers appreciate. “If you don’t understand how to do something, ask. I’m not here to judge, I’m here to help,” she explained.

Her personality is well-suited for talking to people. “I’m an outgoing person, I like meeting new people,” she explained. Then, an understatement, “I’m not shy.”

Whether she’s assisting new drivers, talking to school children or representing her gender at a WIT function, her intent remains the same. “I’m always planting those seeds to be safe,” she said. “I tell them to be safe out there, always stay alert and watch out the other person.”

What’s next in Moniz’ career? “I want that gold ring from Bison,” she said, referring to Bison’s gift for accumulating a million safe miles. “I’m over 700,000, and I want my millionth mile.

After that? “I’m not sure,” she answered. “If I ever quit driving, I’d like to get into the driver development or safety aspect of the industry.” Some might argue that she’s already pretty good at developing drivers and promoting safety, as well as representing with pride the women in the trucking industry.

“If I ever get out of trucking, I’ll probably spend time with the grandkids,” she concluded. There likely will not, however, be a lot of shopping. “I hate shopping,” she quipped. “Are you surprised?”

Whatever the future holds, Treana Moniz will undoubtedly approach it with the same determination and drive that earned her the selection as WIT’s Member of the Month. She’s happy to help anyone else get there, too.