CHATTANOOGA, Tenn. — Chattanooga-based trucking company, U.S. Xpress, honored 10 of its drivers for above-and-beyond achievements at a virtual ceremony in June. The annual awards event for drivers and their families recognizes drivers for outstanding achievements in safety and leadership.

This year’s honorees were recognized for a breadth of achievements, from safely completing millions of miles to earning special praise from customers. Husband-and-wife team-driving duo Karen and Richard Black of Orange Park, Florida, were named U.S. Xpress’ “Dedicated Team Drivers of the Year.”

Throughout the year, Karen and Richard showed above-and-beyond dedication to their work, including covering another driver’s shipment when a medical emergency came up.

“They rented a vehicle out of their own pocket, drove all night, and jumped into a tractor that wasn’t theirs to ensure a shipment was completed,” said fleet manager Mike Deleon. “These outstanding drivers show their incredible work ethic day in and day out by making our customers freight their priority.”

On July 4, the couple were guests of President Donald Trump at the White House’s “Salute to America” Independence Day celebration, where they, along with others working on the front lines during COVID-19 pandemic, were honored. 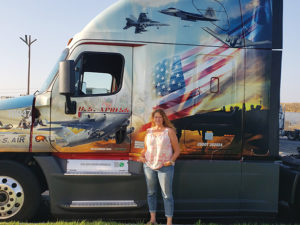 Karen and Richard spend about one week at home for every six to seven weeks on the road. The couple likes to split the driving to maximize their time on the road, with Karen driving during the day and Richard driving through the night. But more than strategy, the couple says the key to successful team driving is having respect for the person you’re driving with.

“I enjoy the work because we can spend so much time together,” said Karen.

“I just like the freedom of it,” added Richard.

Both veterans, the couple credits their work ethic to their time in the military. Karen was in the U.S. Navy for five years and was one of the first females on an aircraft carrier. Richard was in the U.S. Air Force for nine years, serving as an in-flight refueler based in Oklahoma. 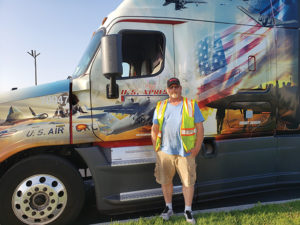 When asked how their lives have changed over the past few months, Karen said “The last few months have been really nice. With everyone quarantined the roads are wide open. I’ve been able to drive so many more miles during the day, but traffic is starting to come back.”

For a couple that spends so much time on the road they both agree that a nice rug in the trailer, a good mattress topper and a stop at Texas Best Smokehouse in Tyler, Texas, make life on the road feel more like home. Karen and Richard said driving in the southeast U.S. is their favorite, and they try to make the most of all of their trips, even when there are unexpected delays, recalling a time they got stuck in Knoxville Tennessee, for a few days and took a trip to visit Dollywood.

Team-driving duo among drivers recognized by U.S. Xpress for their above-and-beyond dedication

Truck drivers deserve alot of recognition for all they do during theses rough times. Karen and Ricky Black are great people.