The Truckload Carriers Association (TCA) has endowed three new scholarships in the name of two former chairmen. Two scholarships are in honor of the late Thomas R. Schilli, and one is in honor of Keith Tuttle.

TCA President John Lyboldt made the announcement during the Board of Directors meeting at Truckload 2021: Les Vegas in September.

“The scholarships, part of the larger Past Chairmen’s Fund Scholarship initiative, have been endowed through generous donations to honor the distinguished careers of two long-standing pillars of our industry and association,” said Lyboldt.

In order for a TCA Past Chairman to have a fully endowed scholarship in their name, their Past Chairmen’s Fund is required to receive $50,000 in donations.

Schilli served as chairman of the board from 1988-1989, during which time he was one of the most vocal supporters of a Scholarship Fund promoting the future of the trucking industry. This type of innovative, people-first thinking carried over into all aspects of his 50-plus year career and enabled him to transform Schilli Motor Lines, Inc. — a company his father founded in the early 1960s with six tractors — into an influential transportation empire with companies including Schilli Transportation Services, Inc.; Schilli Leasing; Schilli Specialized; and Schilli Distribution.

In addition to serving as TCA’s chairman, Schilli held leadership positions within the Indiana Motor Truck Association, the Indiana Carrier Advisory Board, and the American Trucking Associations. He was also deeply invested in charitable organizations around his hometown of St. Louis, establishing the Thomas R. Schilli Foundation to promote education and provide funds for community members to pursue higher education and equip them with valuable skills.

Receiving the two inaugural Thomas R. Schilli Scholarships, each in the amount of $3,250, are Grace Hensley and Jacob Hammond.

Tuttle served as chairman of the TCA board from 2015-2016 after having been an active participant in many TCA committees and twice serving as its treasurer. In 1980, Tuttle took over the Northwood, Ohio-based Motor Carrier Service, LLC (MCS) from his father. Under Tuttle’s leadership, MCS was named a Top 20 Best Fleet to Drive For five consecutive years, as well as named Carrier of the Year by several of the Fortune 500 companies that use its services.

During Tuttle’s chairmanship, he was a vocal advocate for the image of the trucking industry, having previously served on TCA’s Communications & Image Committee and American Trucking Associations’ Image & Communications committees. He enhanced the profile and visibility of trucking through increased participation in programs such as Highway Angel, Wreaths Across America, the U.S. Capitol Christmas Tree, and the Vietnam Veterans Memorial Fund’s The Wall that Heals. He also advocated for added focus on TCA’s educational offerings, realizing the value that continuing education for the workforce could provide, and he oversaw the launch and expansion of revamped TCA online learning platforms.

Tuttle is also involved in many charitable organizations and currently serves on the Board of Trustees for Shriners Hospitals For Children-Chicago. The inaugural Keith Tuttle scholarship will be awarded during the 2022-23 school year.

“TCA and I are extremely honored to receive this support from the Schilli family and Keith,” shared TCA Scholarship Fund Chairman and Wilson Logistics Founder and CEO Darrel Wilson. “They not only served the association and devoted their lives to the industry, but continue to give back. We are thankful for their continued support.”

Since 1973, the Fund has provided scholarships to students associated with the trucking industry. Each scholarship recipient must be a student in good standing who is attending a four-year college or university, and must be associated with a TCA member company as an employee, independent contractor, or the child, grandchild, or spouse of an employee or independent contractor of a TCA member company.

The Fund awards up to $6,250 per year to full-time undergraduate college students with ties to the trucking industry. Much of the program’s support comes from within the truckload family — companies and individuals who are committed to the future of trucking.

To find out how to support the program, or to meet the 2021-22 TCA Scholarship recipients, visit truckload.org/scholarships. 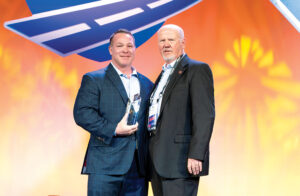