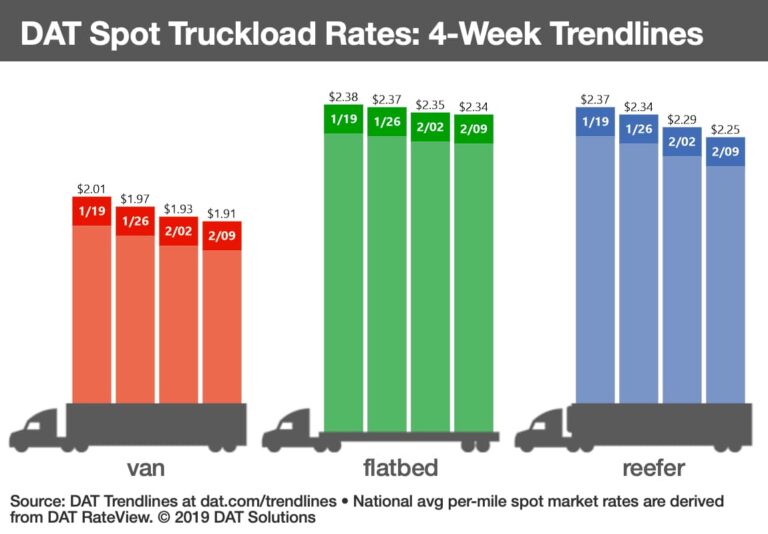 PORTLAND, Ore. — Spot truckload rates dipped again during the week ending February 9 despite higher freight volumes than at this time in each of the past three years, said DAT Solutions, which operates the DAT network of load boards.

The number of posted loads and trucks both increased 4 percent last week but rates sagged for all three equipment types:

Average outbound rates from most major markets are well below where they were a month ago and failed to make gains last week. Rates on many lanes affected by extreme winter weather drifted back down to earth, including:

The number of flatbed load posts on DAT load boards increased 16 percent last week while truck posts were up 9 percent, an indication that construction season is heating up. It helped lift the national average flatbed load-to-truck ratio from 22.6 to 24.1 flatbed loads per truck.

The national reefer load-to-truck ratio moved down from 6.6 to 5.9 reefer loads per truck. Regionally, the focus for reefer haulers is shifting to Florida, where it’s still early for citrus harvests but prices are firming up on key lanes out of the state:

Higher prices out of Miami and central Florida likely means that strawberries, tomatoes, and other mixed vegetables are on the move.