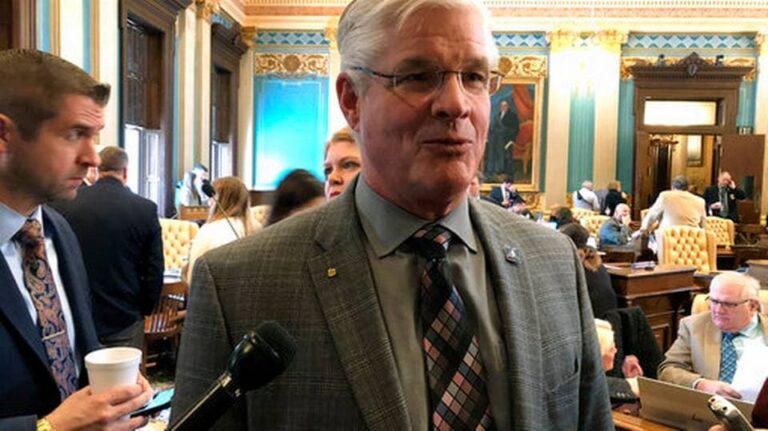 LANSING, Mich. — Republican legislative leaders on Wednesday did not rule out the need for tax or other revenue increases to improve Michigan’s deteriorating roads but said they want to see what is proposed by Democratic Gov. Gretchen Whitmer, who promised in her State of the State speech to soon outline a “real” fix.

House Speaker Lee Chatfield and Senate Majority Leader Mike Shirkey discussed the roads and other issues after Whitmer used her address to identify infrastructure as one of two crises facing the state along with the education system.

“There’s no way we’re going to fix this problem that’s been 50 years in the making without coming up with new revenue for infrastructure,” Shirkey, of Clarklake, told reporters during a joint roundtable with Chatfield that served as their official response following Whitmer’s Tuesday night speech. He stopped short of backing a specific plan — such as raising fuel taxes or vehicle registration fees — “because we haven’t had the best ideas surface yet.”

Higher fuel and registration taxes took effect two years ago as part of GOP-enacted laws to gradually pump $1.2 billion more annually into transportation, but many agree it is not enough new spending. Whitmer will include a proposal in her March budget presentation to lawmakers.

Chatfield, of Levering, did not go as far as Shirkey in agreeing “new revenue” is needed but also did not reject it outright. He reiterated his support for ensuring all taxes paid at the pump go to infrastructure . The sales tax on fuel now primarily is directed to schools and municipalities.

It would be “irresponsible,” Chatfield said, to ask taxpayers to pay more without also reducing other spending.

“It could be new revenue, but it does not necessarily mean there won’t be cuts somewhere else in the budget,” he said.

The leaders largely agreed with Whitmer on the major issues that should be tackled, with some exceptions. Chatfield, for instance, said she “missed” an opportunity to talk more about lowering high car insurance premiums — a top Republican priority — and changing the criminal justice system .

He and Shirkey were cautious about her call for the state to provide two years of tuition for high school graduates to attend community college or a four-year college or university. The assistance would cover tuition or mandatory fees not already offset by need-based federal Pell Grants or the state’s tuition program for Medicaid recipients. A separate program, modeled after one in Tennessee, would help adults 25 and older earn a technical certification, associate degree or transfer to a four-year school.

“We heard a lot of neat ideas last evening and things that the governor believes should be provided to the citizens of our state,” Chatfield said. “What we didn’t hear is how that revenue will be accumulated. I think it’s important to note that the state of Michigan only has the money that we take out of the pockets of the people that we serve.”

Shirkey said the notion of “free” college “is something that we’re going to explore in great detail.” He said he is not sure that cost is the No. 1 obstacle for people, and he wants to make sure students are getting “value.” He also said the business community should take more ownership of working to address companies’ problem with finding enough qualified workers.

Whitmer on Tuesday announced a goal of increasing the number of residents age 16 to 64 with a post-secondary credential — an industry certificate, associate degree or higher — to 60 percent by 2030, up from 44 percent of the workforce as of 2016.