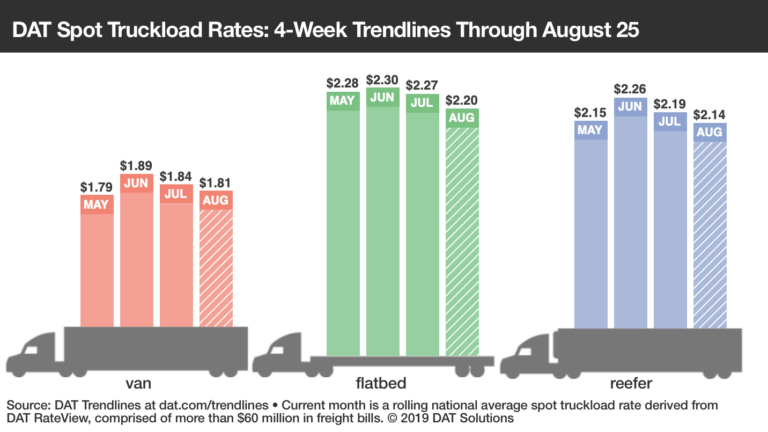 Spot truckload freight pricing held firm during the week ending August 25 despite a 3% drop in the number of posted loads, according to DAT Solutions, which operates the industry’s largest network of load boards.

The number of posted trucks increased 2.6% compared to the previous week, the DAT report said. Meanwhile, pricing was virtually unchanged week over week, a sign that spot rates have hit a seasonal low prior to Labor Day, when demand typically starts to build again.

National spot rate averages through August 25 were down from July averages. The spot rate for van was $1.81 per mile, 3 cents lower than the July average. Van volume on DAT’s 100 top van lanes was up 3% for the week ending August 25, but pricing changes were muted: 44 lanes were higher, 47 were lower, and nine were neutral compared to the previous week, with no dramatic swings either way.

The rate from Columbus, Ohio, to Buffalo, New York, saw the biggest gain for the week. It rose 13 cents to stand at $2.82 per mile. Meanwhile, the biggest drop was for the return trip from Buffalo to Columbus; rates dropped by a dime, to $1.85 per mile.

The national average van load-to-truck ratio fell from 2.4 to 2.2.

The national average reefer load-to-truck ratio fell from 4.7 to 4.4 and rates were higher on just 24 of DAT’s 72 high-traffic lanes. Of the reefer lanes that saw higher rates, DAT reported, the biggest increases were on relatively low volumes of spot freight.

Demand for trucks was heaviest in California, where the number of available loads was up 9% in Los Angeles, 8% in Fresno and 6% in Ontario. Rates in these market were softer compared to the previous week, however.

DAT reported the national average flatbed rate for August 25 was $2.20 per mile, 7 cents lower than July.