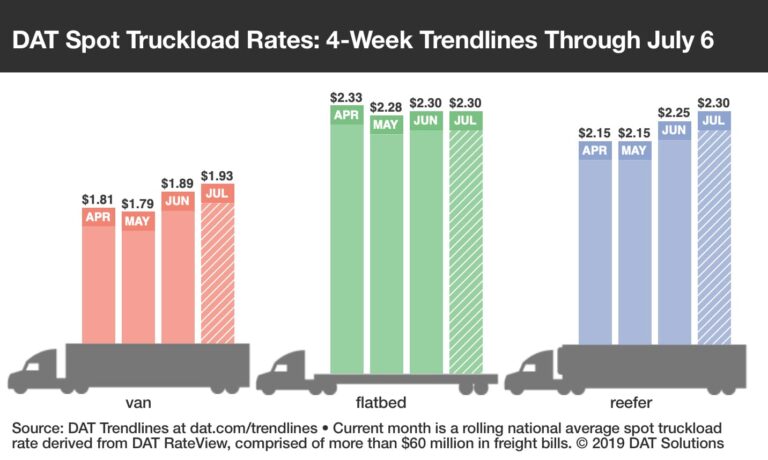 Load-posting volume on the DAT network fell 45% compared to the previous week as many businesses reduced their schedules due to the Fourth of July holiday.

The van load-to-truck ratio fell from 3.2 to 2.0, more than a point below the June average of 3.1 loads posted for every truck. Still, spot rates were higher on 52 of the top 100 van lanes.

Chicago and Columbus, Ohio, were two major markets in the Midwest that improved:

The average outbound rate from Houston was down 3 cents to $1.76/mile, continuing a trend of weaker outbound rates, likely because of a slowing oil market in Texas. One bright spot: Dallas to Houston increased 14 cents to $2.51/mile.

The holiday helped send the national average reefer load-to-truck ratio from 5.5 to 3.5. Of DAT’s top 72 reefer lanes by volume, rates were higher on 46 and declined on 23. Three lanes were neutral.

There was more good news in the Midwest as the average outbound rate from Grand Rapids, Michigan, increased 17 cents to $2.73/mile. Grand Rapids to Cleveland surged 44 cents to $3.87/mile and Grand Rapids-Atlanta gained 32 cents to $2.23/mile. It’s too early for Michigan apples, but asparagus, blackberries, peaches, potatoes and strawberries appear ready to move.