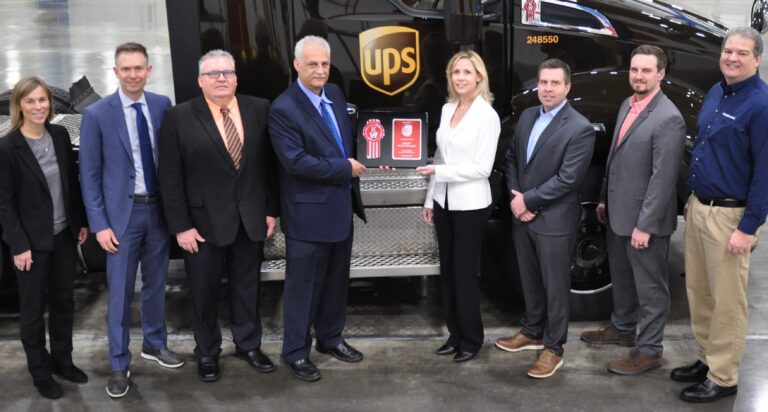 COLUMBUS, Miss. —  The 200,000th Paccar MX engine produced for the North American market at the Paccar Engine Co.’s engine plant in Columbus, Mississippi, was celebrated recently during a special presentation to UPS. The milestone engine is a Paccar MX-13 was installed in a Kenworth T680 Day Cab going into service in UPS regional haul operations.

“It was fitting to recognize UPS with the 200,000th Paccar MX series engine. We have established an excellent collaboration with UPS over the years, aided by the strong support of MHC Kenworth – Atlanta and the Paccar Columbus engine plant,” said Mike Dozier, Kenworth general manager and Paccar vice president. “Paccar MX engines are known for outstanding fuel efficiency, exceptional reliability and durability, low ownership cost, high horsepower and torque ratings, and quiet operation. These important attributes provide tangible benefits to UPS and all our customers operating Paccar MX engines.”

“We appreciate the selection of UPS to receive the milestone 200,000th Paccar MX engine for installation in our newest Kenworth T680. Our Kenworth T680s equipped with Paccar MX engines are performing well in UPS operations throughout the United States,” said Bill Brentar, UPS Senior Director of Maintenance and Engineering for Transportation Equipment at the company’s headquarters in Atlanta, Ga. “UPS maintains a productive working relationship with Kenworth and MHC Kenworth – Atlanta, and we look forward to our continued mutual success.”

The Columbus factory began producing Paccar advanced diesel engines in 2010. Located on a 400-acre site in the Golden Triangle Industrial Park, the 450,000-square-foot factory employs more than 600 people, and produces 160 engines each day of operation, according to plant manager Walters. The plant has been a zero-waste-to-landfill facility since it was opened, and nearly 90 percent of material arrives at the plant in returnable containers.

“Employees are critical to the plant’s success with the quality, innovation, technology and care they build into every Paccar MX engine produced here,” Walters said.