COLUMBUS, Ind. — Net U.S. trailer orders of 51,208 units during September showed a significant improvement from August (up 82%), and were 174% above September 2019. Before accounting for cancellations, new orders of 52,000 units were up 77% compared to August and were 140% better year over year, according to this month’s issue of ACT Research’s State of the Industry: U.S. Trailer Report. 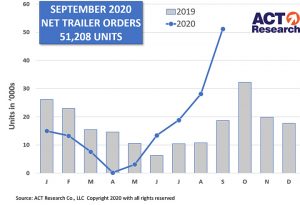 “Pent-up demand is one factor, as we’re now seeing capex release that was curtailed earlier this year by COVID-driven uncertainty,” he continued. “Another factor is lower build rates, pushing fleets to quickly submit their orders, rather than take a chance that new units might not be delivered until well into next year.”

“In addition to fleets, dealers could also be worrying about the timing of stocking orders; conversations have included mention of dealers entering the fray in preparation for next year. Further solid numbers are likely in the near-term, as the industry enters what has normally been its usual ‘order season’,” Maly concluded.