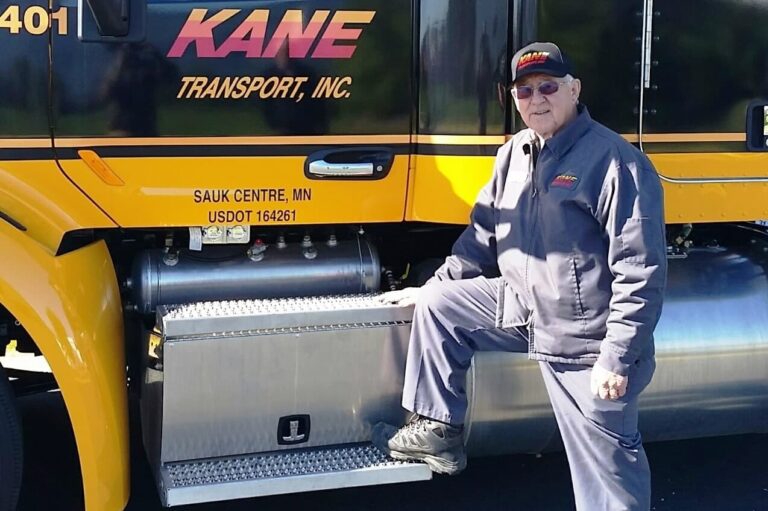 Art Stoen, 74, only takes one medication. It’s for cholesterol, and he had to be talked into that. To hear him tell it, sounds like the doctor may have had to twist his arm a little.

After all, said the 55-year career truck driver, “I feel fine, energetic.”

When The Trucker caught up with him, Stoen [pronounced Stone] had just shoveled snow in front of his home in Austin, where a couple of days before the wind chill had been 60 below. By the way, that’s Austin, Minnesota, not Texas.

Besides deer hunting, fishing is one of Stoen’s passions. He just recently retired from Kane Transport Inc., and he’s learned a man needs stuff to do in retirement.

The first time he retired, when he was a young 63, things just got too boring, so he went back to the job he’s always known: driving a truck.

“This award is a great way to honor the best in our industry; driving is no easy task, especially when you take into consideration his daily driving conditions like congestion, driver distractions and Minnesota winters,” said MTA President John Hausladen in presenting Stoen with the award.

Stoen remembers many days of getting up at 3 or 4 a.m. to pick up his load by 6. Most of the time the road crews “hadn’t sanded the roads” at that hour.

Hausladen said Stoen’s more than 4.4 million safe driving miles are “an astonishing accomplishment, especially given the unique challenge of safely delivering and unloading diesel and gasoline without incident.”

Stoen told The Trucker it would be more miles by now if so much of it hadn’t been regional and local runs when he started driving a truck in August 1963.

He grew up on a farm in Brownsdale in southeast Minnesota. His family raised dairy cattle, hogs and crops and before school each day it was Stoen’s job to milk the cows. He also hauled grain in the family farm truck to the elevator, so after high school graduation in 1962 he answered an ad in the local paper to drive dump trucks full of powdered cement to road crews helping build Interstate 90 in southern Minnesota.

After that, the 18-year-old Stoen worked for a mining company, then a construction company, for which he pulled a gravel truck.

About 1972 he began hauling oil into Wisconsin, then worked hauling black top material to road pavers and later road-building materials to “hot-mix outfits” which prepared gravel and oils to go on new roads.

He also hauled heavy equipment down to Texas and for four years drove regionally for a cabinet company.

Later he did OTR hauling for Kane, a premier Minnesota transporter of petroleum, asphalt, biodiesel and ethanol based in Sauk Centre.

In those days, Stoen did most of his work in a day cab; if he had to stay overnight his employer gave him money for a motel. He didn’t drive a truck with a sleeper berth in it until the ’80s.

To say that Stoen has seen a lot of changes in trucking over the years is an understatement. At one time, he was hauling a lot of heavy equipment which had been repossessed, and when he went to pick it up, the former owners didn’t always want to give it up.

“I’d get chased off the property and had to get the sheriff to help,” Stoen said.

He has driven “just about everything” and said they’re making trucks “so much better” now. It used to take two hands to shift, he said. “It’s a lot safer nowadays.”

He’s noticed more people in a hurry today. They go flying by, he said, when he’s doing the speed limit. But there are “a lot of good people on the road, too,” he said, adding that usually the ones who go flying by end up in the ditch.

He said people seemed to miss less work back in the day. “I would work half sick,” he said, whereas now, “these younger guys get a cold or headache, they call and don’t come in. …  People get headaches a lot. I don’t know what a headache is.”

As a truck driver Stoen never got in a hurry and if somebody wanted to get in front of him, he let them.

“I don’t get too upset about anything; I take it as it comes,” he said. “It doesn’t bother me like it does some people.”

If someone on the road gets angry it doesn’t faze him. “I figure it’s their problem,” he said.

“Years ago, if someone called me names, it went in one ear and out the other. I’ve been that way my whole life.”

Even with all his safe miles, Stoen was a little surprised to get MTA’s most prestigious award. He almost didn’t attend the awards ceremony, as he and his wife Marcia had planned to go see the Grand Canyon. But they decided to attend the ceremony and cancelled their hotel reservations. Stoen had received MTA’s September Driver of the Month, and figured he would be mentioned for that award in passing.

“When they called out driver of the year and said my name, I was surprised,” Stoen said.

He received a $500 check, a trophy, and said Marcia “got the biggest bouquet of flowers she’s ever gotten in her life.”

Now he aims to finally see the Grand Canyon and this summer they will no doubt go fishing a lot.

Stoen he knows he will miss driving a truck, seeing the scenery and meeting lots of different people.

“I made a lot of friends” on the road, he said, “but at my age, most of my friends are deceased. This past year I went to six funerals and got in one wedding.

“I live day by day and I thank God every morning that I’ve got another day.”