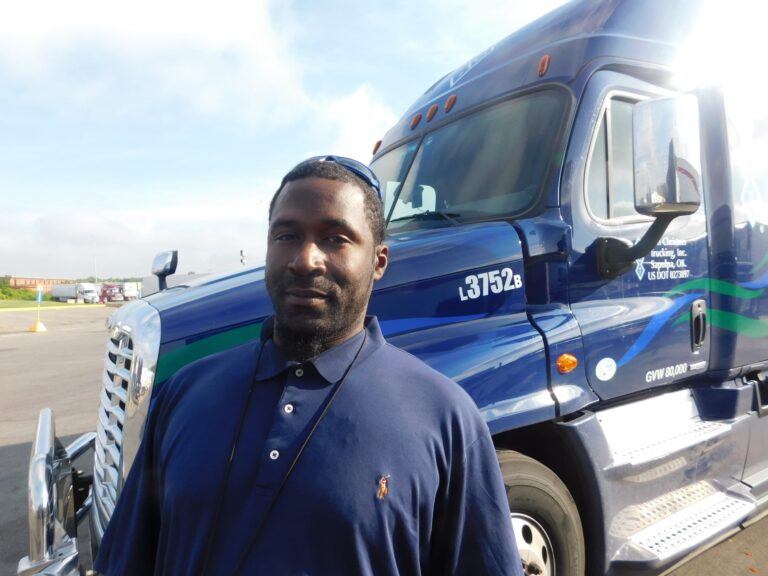 Do teachers still have kids write essays about “What I did on my summer vacation”? If they do, Gaylon Walker’s kids will have it made.

It was about 8 a.m., and like a lot of his fellow truckers at the Petro Truck Stop off Interstate 40, exit 161 just east of Little Rock, Arkansas, Walker was getting ready for a day on the road. He approached the food counter with a spring in his step.

“I hope you’re ready for me,” he said to the woman behind the counter, “because I’m hungry.”

She stood ready. He kept ordering, and the way she kept loading up the container, he was lucky the truck stop didn’t sell their meals by the pound.

She set the brimming container near the register. On second thought, Walker said, his son Kollin is sleeping in the cab, maybe he should get a little bit more.

“You’re just remembering you son is with you?” the woman asked. No, that’s not it, Walker explained. He’d been ordering for both of them, but it’s easy to underestimate the appetite of a 15-year-old boy.

School let out for the summer a few weeks ago, and Walker is letting his kids see what dad’s job is all about.

Actually, it’s all still pretty new to Walker. He has been a professional truck driver for just a bit over a year now. Before that he had worked at a Kroger distribution center back home in Houston.

“I was a truck unloader,” he said. “I worked in the freezer for about five and a half years, then I started unloading trucks the remaining time I was there.” It was a setting that constantly reminded him of a childhood dream.

Of course, the dreams of a 4-year-old child are free from adult realities that can put a damper on those dreams. But he came into trucking with an adult perspective. The first company he worked for wasn’t so great, he said. But that’s to be expected.

“In the trucking industry, you might have to go through two or three companies before you find that one company you’re going to stay with,” he said. He feels like he’s found one he can stick with. About a month ago, Walker signed on with John Christner Trucking. “I’m buying a truck through them. It’s a good program.”

His goal is to eventually have his own business with three or four trucks, and if all goes well, leasing them through Christner.

Having the maturity to know that living out his dream was going to take some getting used to, Walker said he’s adapted to life on the road in his first year. One thing he realized very quickly is that you burn a lot more calories unloading trucks than you do driving them. Don’t let that gigantic truck stop breakfast fool you, he’s careful about what he eats.

He gets one meal a day at a restaurant or truck stop. The rest of the time, he keeps a well-stocked fridge. “I’ve got salads, I’ve got apples, oranges, bananas, oatmeal” and a few more fun-food type snacks to keep him full on the road.

With 10 hours a day behind the wheel, whenever he has a break, he makes it a point to walk “at least a mile, mile and a half a day” to make sure his legs stay strong.

Of course, the biggest adjustment has been the time away from his wife and five kids.

“I call them when I’m on the road, every day,” Walker said. “They video chat with me, make sure I’m all right.

“They’re OK. If anything is needed at home as far as money or my expertise they call and talk to me. And when I’m there we have as much fun together as we can.”

Walker is usually out on the road three weeks at a time, and now that summer is here, he’s bringing the kids along on an adventure. His eldest daughter, Danaijha, just graduated high school and is busy getting ready to join the Navy, so Kollin got to go first. Right now they were running a load of pork from Washington to Alabama, through the Rocky Mountains.

“He loves it,” Walker said. “He’s been taking a lot of pictures.”

Kollin’s been out with him for about three weeks. Once this run is over, they’ll head back to Houston, 10-year-old sister Dia’ana and 7-year-old brother Darius will get to ride with dad. Kid sister Daphne, who’s 4, will have to wait a few years. She’ll stay home with mom as she tends to the family’s barbecue business back in Houston.

Once the kids are back in school, all he needs to do is bring a little bit of the family’s secret family recipe pepper sauce with him and he’ll feel like he’s right at home.

At the Truck Stop: Driver is living his childhood dream, with his kids

Yep, high hopes and empty pockets! Good luck with that dream. You’ll be lucky if you can finish paying for the one you’re driving! You better keep the doors closed and keep it moving because if you do manage to pay for it via “leas purchase”, its gonna have high’azz miles and you’ve paid waaaaay to much for a damn fleet truck!