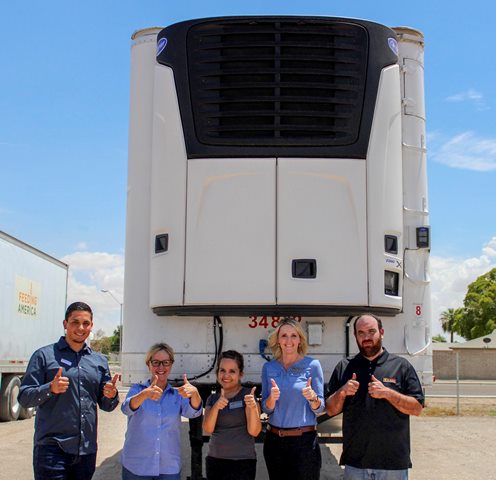 “I can’t tell you how exciting this is for us,” said Shara Merten, president and CEO, Yuma Community Food Bank. “When something this spectacular happens, we really appreciate it.”

Installed on a 53-foot trailer, the X4 Series refrigeration unit will enable the food bank to double its geographic reach, extending beyond Yuma County into La Paz County to the north, a combined 10,000-square-mile region with a population of about 227,500. Additionally, since the refrigeration unit is compliant with strict emissions requirements of neighboring California, the reefer can be used to collect food from that agricultural region and participate in food exchanges with southern California food banks, something the Yuma Community Food Bank was unable to do with its existing equipment.

“We are exceedingly grateful to have been a part of this project with the Yuma Community Food Bank,” said Alex Juarez, business development manager, CT Power of Phoenix, the Carrier Transicold dealership that installed the refrigeration unit and helped source the trailer. “Through this initiative, the food bank can continue its mission to relieve hunger among countless families throughout southwestern Arizona.”

The combined unemployment rate for Yuma and La Paz counties is well above the national average, and 20 percent of the families here are food insecure. Merten estimated that the value of the Carrier Transicold refrigeration unit equates to an additional 205,200 meals that can be served by the Yuma Community Food Bank. Each year, citizens classified as “working poor” make more than 200,000 visits to their food banks.

“As Carrier Transicold focuses on helping emerging nations develop their cold chains as a means of getting more perishable food to hungry people while reducing waste and the excess carbon emissions created, we recognize there are needs in the U.S. as well. That’s why we support Feeding America and its member food banks,” said Jon Shaw, director, global communications and sustainability, Carrier Transicold and Refrigeration Systems.

In 2017, Carrier Transicold announced the program in support of Feeding America network food banks across the U.S. The grant, which was renewed for 2018, covers the cost of the equipment and installation of truck and trailer refrigeration units for individual food banks in the Feeding America network. Beyond Arizona, the program has helped more than a dozen food banks covering parts of Connecticut, New York, Pennsylvania, North Carolina, Florida, Louisiana, Michigan, South Dakota, Nevada, Utah and California.