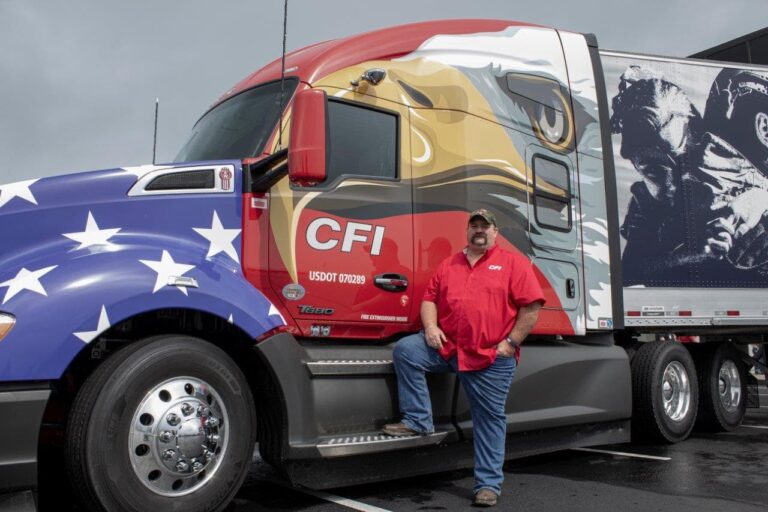 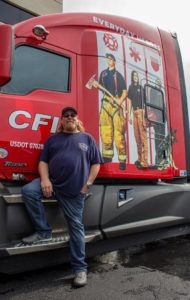 Truckload carrier CFI has added to its fleet of big-rig trucks with custom-designed, large format truck wrap graphics recognizing those who serve.  The company recently introduced a special unit honoring Joplin’s First Responders, which pictures actual Joplin fire, medical and emergency service personnel. The rig (left), is piloted by CFI professional driver Larry Dohogne, a trained fire and EMS responder who volunteers with local agencies and served in the military.  CFI also rolled out two new “True to the Troops” tractors and trailers honoring America’s soldiers. Chosen to operate the new “Eagle” tractor (above) was CFI professional driver Chuck Corkill, a U.S. Army reserves veteran and former volunteer fireman, assistant fire chief and EMT.  Corkill also has delivered Wreaths Across America loads honoring the nation’s fallen soldiers, with transportation donated by CFI. The new commemorative trucks join CFI’s fleet traveling the nation’s highways as working big rigs. They recognize the professional excellence and critical role first responders play in safeguarding our communities and the service of America’s military veterans. CFI rolled out its first commemorative “True to the Troops” trucks in 2015.  In addition to the new first-responder truck, CFI has seven military-themed trucks and four trailers, representing each branch of the armed forces. Some 16 percent of CFI’s 2,000-person driver workforce are military veterans.

Those are nice but instead of forking out the money to wrap the trucks why invest that money into your employees and give them raises.