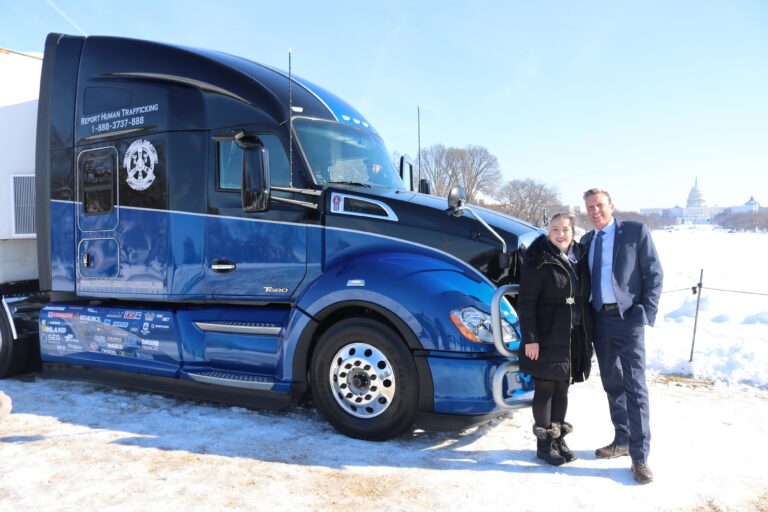 “She awoke a passion within me.”

That’s Don Blake explaining his reaction the first time he heard Kendis Paris, co-founder and executive director of Truckers Against Trafficking (TAT). The persuasive Paris convinced Blake that the issue of human trafficking is real, and she instilled in him a desire to help.

“It really just touched my heart, what these kids go through — are going through,” he said in an interview with The Trucker.

Like many in the trucking industry, Blake had ignored the prostitution that is sometimes in close proximity to the industry.

“I started 22 years ago as a parts delivery driver,” he said, “and every day when I drove my route, there was prostitution going on right beside the road. My response was to look away.”

He came up with an idea to raise money for TAT by building a new tractor, decorating it with the TAT logo and contact information, and auctioning it off, with the proceeds going to TAT. As new truck sales manager at Inland Kenworth of Tolleson, Arizona, Blake had vendors, business associates and friends to call on, and they came through with sponsorships — $5,000 here, $10,000 there, and $25,000 from Kenworth.

“I called Kendis and told her what I wanted to do,” he said. “She said, ‘OK, let me know.’ When I called her again and told her how the truck was coming together, she said, ‘I think he’s serious.’”

The first truck sold for $140,000 at auction and raised $83,000 for TAT after expenses. That truck, however, raised more than money. “We had so many sponsors for the second truck that we were able to donate 100% of the proceeds to TAT,” Blake said. That donation totaled $162,000. The tractor was assembled using components made by many of the sponsors.

While Blake credits Paris for inspiring his work at TAT, where he is also a director, he credits another source for his desire to help others. “Faith is the foundation of my work at TAT,” he said. “Maybe it’s my Lord’s calling to use what I’ve been given to help others.”

Blake’s love for children extends beyond his work with TAT. Alongside his wife, he coaches girls’ volleyball at Phoenix-based Northwest Christian School. On one occasion, he brought a new Kenworth tractor from the dealership so the girls could climb inside and blow the horn. All three of the Blake children are involved with the team, with both daughters helping coach while their son keeps score at competitions.

Their eldest daughter, Emma, has volunteered at TAT events, as well, and chose “Why Prostitution Should Not be Legalized” as her high school senior-class project theme.

Blake believes that his faith may have had something to do with the buyer of this year’s truck, as well.

“I prayed and prayed that the right person would purchase the truck,” he said. That “right person” turned out to be Collin Stewart, president and CEO of Phoenix-based Stewart Transport. The company runs refrigerated and custom freight nationwide and has special plans for the TAT truck.

“They’ll keep all of the TAT decaling and contact information,” Blake said. “The driver is trained in combating human trafficking and will make presentations for TAT all over the country, so the giving continues after the money donation.”

Blake thinks he will lead the project for another TAT truck but isn’t sure if it will be this year, due to the additional workload of the project.

“I’m already getting calls from sponsors who want to participate,” he said, “including some new ones.” When he builds the next truck, he may ask sponsors for more than financial help.

“I’d like to really focus on the demand side of human trafficking,” he said. “I’d like to see if we can get sponsors to also adopt antitrafficking policies at their own companies.”

He isn’t shy about his belief that men need to do more to help end the trafficking problem.

“As men, we need to step up,” he said. “No more of the ‘boys will be boys’ stuff.” He acknowledges that many carriers have adopted antitrafficking policies that, for example, prohibit the use of any company property for trafficking purposes. For example, such policies might prohibit the use of company-owned phones or computers to arrange for prostitution services, or they might prohibit anyone in the tractor other than the driver without permission from the company.

“Carriers can play a big role by adopting anti-trafficking policies and by training all employees in how to recognize and report trafficking,” he said.

Blake plans to continue serving on the board of directors at TAT. He acknowledges that it isn’t always easy to juggle his full-time sales job with his service at TAT, coaching at the school and family obligations, but he knows where to turn for help.

“My faith helped me get here and gave me the strength to get it done,” he said.

Don Blake heard the call to fight trafficking twice: from above and face-to-face

Hey Cliff,
Don Blake here. I wanted to thank you for this wonderful article. It is so well written, and from a perspective that includes God. Which is something that is rare these days.
Just loved it.
Thank you.