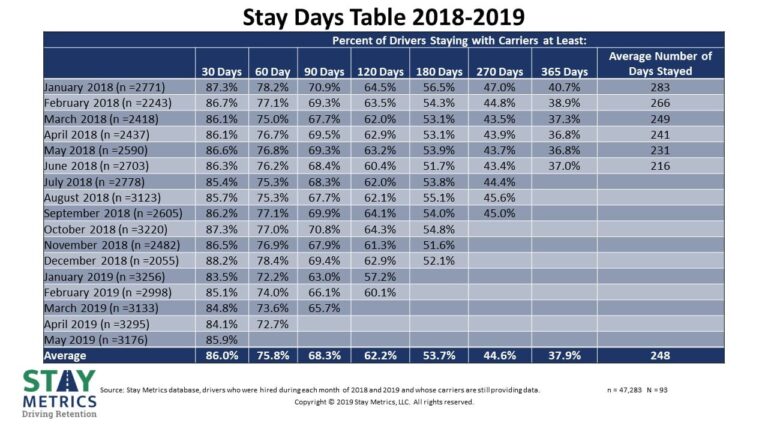 SOUTH BEND, Ind. — Stay Metrics, a provider of driver retention tools, has updated its Stay Days Table for the first half of 2019.

The Stay Days Table was recently expanded to include a column for “Average Days Stayed” that is calculated once a driver group has reached 365 days since their hire date.

Stay Metrics CEO Tim Hindes said the key insight from this update is that early-stage turnover is increasing overall across the industry.

The early indications for drivers hired in 2019 seem to be following this trend. Averaging several months together and comparing by year shows this most clearly.

“This update drives home the message we’ve been talking about for years: early turnover is where it’s at,” Hindes said. “Getting the early driver onboarding experience right should be a critical focus for every carrier. And we at Stay Metrics, with our years of research into this trend, can help.”

Chris Henry, TPP Program Manager and FreightWaves’ vice president of Carrier Profitability, recently reported that the cost of turnover, on average, sits around $10,900 per hire. This cost hurts more when the turnover occurs before the first year, as the driver has fewer days on the job producing revenue for the carrier, he said.

“These data point to a need to better understand what drives early-stage turnover,” said Dr. Bradley Fulton, director of research and analytics at Stay Metrics. “The key to doing this is a well-designed, comprehensive set of measures that can identify these factors and how they fluctuate over time. Analytics that lead to insights and highlight opportunities for improvement are also critical, but the analytics are only as good as the data on which they are based. Quality, comprehensive measurement is the foundation.”

Hindes said Stay Metrics offers an Onboarding Survey program for carriers to track drivers’ levels of satisfaction during the crucial first year on the job. Stay Metrics assesses drivers’ thoughts right after orientation to determine their expectations, how well orientation went, and their starting level of satisfaction at a carrier. Then, at several one or more key time points in the first year, a second survey determines how well drivers think the carrier is doing meeting their initial expectations and preparing them for the job.

Along the way, he said Stay Metrics alerts carriers when an opportunity arises to step in, reach out to a driver, and solve an issue before it becomes a cause for turnover. Possible triggers could include a sharp drop in overall satisfaction, a driver’s nonresponse to a survey, or a driver specifically asking a question on the survey.