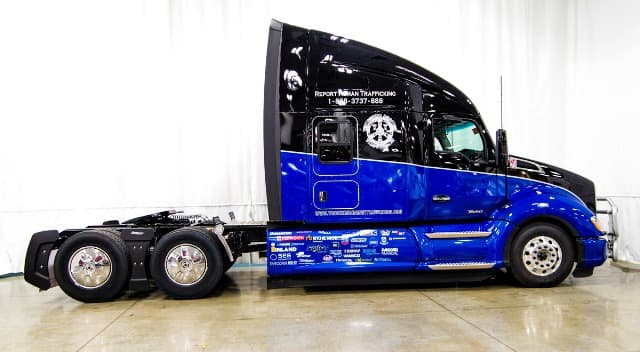 TOLLESON, Ariz. — In an effort to further educate and fund efforts against human trafficking, Inland Kenworth has once again put together a special “Everyday Heroes” Kenworth T680 with a very distinctive paint scheme and signage.

The project, in conjunction with Truckers Against Trafficking (TAT), has received significant support from platinum sponsors Kenworth Truck Co., Inland Kenworth and Ritchie Bros., along with other leading industry suppliers.

Proceeds from the sale of this Kenworth T680, which has a retail value of $162,000, will go directly to Truckers Against Trafficking, a non-profit organization devoted to stopping human trafficking by educating, mobilizing, and empowering the nation’s truck drivers and rest stop employees.

The Kenworth T680 Everyday Heroes truck will make its first public appearance at TAT’s Everyday Heroes Truck press conference on January 15 on the National Mall in Washington., From there, the truck will be displayed at the American Trucking Associations Technology and Maintenance Council 2019 annual meeting in Atlanta March 18-21, the Mid-America Trucking Show in Louisville, Kentucky, March 28-30 and at Richie Bros., which will host the auction of the TAT Kenworth T680 in Phoenix on May 17.

Proceeds from the sale of the Kenworth T680, which has a retail value of $162,000, will go directly to TAT – a 501(c)3 non-profit devoted to stopping human trafficking by educating, mobilizing, and empowering the nation’s truck drivers and rest stop employees.

Blake said he’s been touched by the industry support for the Everyday Heroes Truck.

“This started out as an idea in 2017 that got rolling, and it was a great success. Now, the sponsors we’ve worked with again are so supportive. It shows our industry’s true colors to pull together to raise money for a great cause,” Blake said. “I’m especially appreciative to Kenworth. When I reached out to see if they would be a sponsor again, they were more than happy to help. Kenworth has been great to work with, and in 2019, the T680 will have its own booth at TMC and the Mid-America Trucking Show.

“Kenworth is a strong supporter of the efforts of Don Blake and Inland Kenworth in this important project. Don’s involvement with Truckers Against Trafficking is inspiring, and we look forward to a very successful fund-raising auction in May,” said Kurt Swihart, Kenworth marketing director.

Even with the auction still five months away, Blake is ahead of schedule with signing sponsors at different sponsorship levels that help build the T680.

“Nearly every company that donated in the 2017 auction has agreed to sponsor the truck in 2019, and we’ve added new sponsors this year as well,” Blake said. “There are many good companies willing to donate their time and money to this great cause. When the auction is done, there will be an owner with a special truck that is fitted with the best specs.”

Blake’s initiative to contribute to TAT’s efforts led to an expanded role with the organization.  “Don became a TAT board member shortly after the 2017 auction,” said Kendis Paris, executive director of Truckers Against Trafficking. “Not only did we ask him to join the board due to his tremendous work on the Everyday Heroes Truck, but because Don is a true TAT champion. He believes deeply in the mission and enlists his resources and ideas.”

Through his involvement as a TAT board member, Blake is scheduled to be the keynote speaker at the Everyday Heroes Truck press conference.

“I look forward to speaking and plan to share my story on how a small group of people can make a difference,” Blake said. “This organization means a lot to me. I have two daughters, and I can’t imagine anyone being subjected to human trafficking. There is a lot of work ahead to bring down this terrible crime, but I will continue to do my part.”

“The resources that Don orchestrates on TATs behalf allow us to deliver on our mission, which ultimately means more victims of human trafficking being recovered,” Paris said. “Not only does Don inspire others to join our cause, he inspires the TAT staff as well. He reminds us of the power of TAT champions and what can be accomplished when a person is truly motivated.”

According to Paris, truckers are making a big difference.

In the United States alone, profits from the crime of human trafficking are estimated to be worth $32 billion.

“Each year, more truck drivers and truck stop operators are added to the network of TAT trained and educated members – over 663,000 to date,” Paris said. “They are our eyes and ears out on the road and are relied upon to report suspicious activity.”

To further its education, TAT has the Freedom Driver’s project – a mobile exhibit, which educates members of the trucking industry.

“Through the project, we are able to educate more drivers each year,” Paris said. “They know how to identify and report suspicious activity to local law enforcement, which is making a huge impact towards generating human trafficking cases.

Through the national hotline (888-3737-888) operated by the National Human Trafficking Hotline, 2,250 calls have been made by truckers alone since the program began in 2009. So far, we’ve had more than 600 likely human trafficking cases, involving over 1,100 victims … many of whom are minors.”

Paris said TAT is paving the way in an effort to increase the public’s awareness about the crime of human trafficking.

In October 2018, a 15-person Advisory Committee on Human Trafficking was developed by the U.S. Department of Transportation. TAT’s Paris serves as one of the members. The committee’s goal is to develop strategies for reporting trafficking and provide DOT-funded programs that will tackle the growing issue. The committee held its first public meeting in early December.

More information is available on the TAT website at www.truckersagainsttrafficking.org.