LOWELL, Ark. – J.B. Hunt Transport Services, Inc. recently recognized its first company driver to complete five million safe miles driven without a preventable accident, an unprecedented achievement at J.B. Hunt and rarity for the industry. Phil Fortin, a J.B. Hunt Intermodal driver based in South Gate, California, reached five million safe miles in December 2019.
“The professional commitment and resilience it takes to achieve five million safe miles is almost unthinkable,” said John Roberts, president and CEO of J.B. Hunt. “Thank you, Phil, for your dedication to this company and for setting the bar of excellence in safety for others to follow.”
Fortin earned his first safe mile at J.B. Hunt in 1984 as a driver for the company’s Truckload division. Nearly 35 years later, he is one of the company’s most decorated drivers, having received 33 safe driving awards. Fortin reached four million safe miles in 2010, an achievement shared by only 16 other J.B. Hunt drivers. He will receive a $50,000 safe driving bonus for reaching five million safe miles, bringing his career total in safe driving bonuses to $125,000.
“I want to thank Mr. Hunt for having a dream and committing to it, because in the wake of his pursuit, he created so many opportunities for others, me included,” said Fortin. “Together as a team, we make it all work, and I’m grateful for all those around me who helped me reach this milestone.”
J.B. Hunt implemented the Million Mile program in 1996 and has since recognized more than 3,600 company drivers for achieving one million-plus safe miles. Each driver is listed on the Million Mile Wall at corporate headquarters and receives a safe driving bonus for their achievement. In total, the company has awarded more than $28 million in safe driving bonuses.
Fortin will receive additional recognition at the company’s Million Mile event in April. J.B. Hunt has hosted the annual ceremony since 2001 to recognize drivers who achieve one, two, three, four, and now five million safe miles. In addition to an honorary lunch and visit with company leadership, drivers participate in J.B. Hunt’s Million Mile Walk of Fame, a long-standing tradition where employees line four flights of stairs to congratulate them with applause and high-fives.
Also during the same month, J.B. Hunt hired its 10,000th veteran since 2014, a commitment the company has worked diligently to achieve. More than 15% of J.B. Hunt employees are now veterans, and the company has several programs to help transition them from service to a career, whether it be in management, maintenance, office, or driving.
“There’s so much potential for veterans in this industry, so we’ve established a support effort to help them develop rewarding careers that match their skillset with our opportunities,” added Roberts. “This was a bold and honorable goal for us, and I am very proud of all who helped make it happen.” 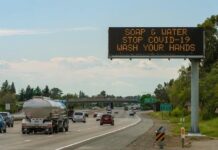 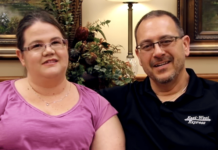