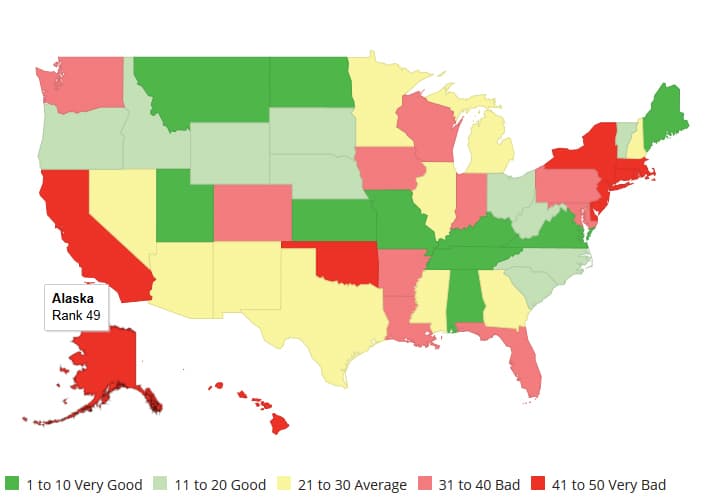 “In looking at the nation’s highway system as a whole, there was a decades-long trend of incremental improvement in most key categories, but the overall condition of the highway system has worsened in recent years,” says Baruch Feigenbaum, lead author of the Annual Highway Report and assistant director of transportation at Reason Foundation. “This year we see some improvement on structurally deficient bridges, but pavement conditions on rural and urban highways are declining, the rise in traffic fatalities is worrying, and we aren’t making needed progress on traffic congestion in our major cities.”

The 24th Annual Highway Report, based on data that states submitted to the federal government, ranks each state’s highway system in 13 categories, including traffic fatalities, pavement condition, congestion, spending per mile, administrative costs and more. This edition of the Annual Highway Report uses state-submitted highway data from 2016, the most recent year with complete figures currently available, along with traffic congestion and bridge data from 2017.

North Dakota ranks first in the Annual Highway Report’s overall performance and cost-effectiveness rankings of state highway systems for the second year in a row. North Dakota’s rural and urban Interstate pavement conditions both rank in the top 10 and the state has kept its per-mile costs down.  Virginia jumps an impressive 25 spots in the rankings—from 27th overall in the previous report—into second-place in performance and cost-effectiveness.  Missouri, Maine and Kentucky round out the top five states.

The state highway systems in New Jersey (50th), Alaska (49th), Rhode Island (48th), Hawaii (47th), Massachusetts (46th) and New York (45th) rank at the bottom of the nation in overall performance and cost-effectiveness. Despite spending more money per mile than any other state, New Jersey has the worst urban traffic congestion and among the worst urban Interstate pavement conditions in the country.

The study finds pavement conditions on both urban interstates and rural interstates are deteriorating, with the percentage of urban Interstate mileage in poor condition increasing in 29 of 50 states. One-third, 33 percent, of the nation’s urban Interstate mileage in poor condition is concentrated in just five states: California, Delaware, Hawaii, Louisiana, and New York.

It’s not just urban Interstates with the rougher pavement, however, the Annual Highway Report finds the percentage of rural arterial principal roads in poor condition at its worst levels since 2000.

Similarly, the study’s three traffic fatality categories —overall, urban and rural—all show more fatalities in 2016 than in any year since 2007.

Traffic congestion remains about the same from the previous report, with Americans spending an average of 35 hours a year stuck in traffic. Drivers in New Jersey, New York, California, Georgia and Massachusetts experience the longest delays due to urban traffic congestion in their metro regions.

The Annual Highway Report finds states disbursed about $139 billion for state-controlled highways and arterials in 2016, a four percent decrease from approximately $145 billion spent in 2015.

“Some may point to the slight decrease in overall state highway spending in 2016 as a cause of the lack of improvement in key highway metrics, but 21 states made overall progress in 2016. Examining the 10-year average of state overall performance data indicates that the national system performance problems are largely concentrated in the bottom 10 states,” Feigenbaum said. “Toward the bottom of the rankings, you have highly populated states, like last-place New Jersey, along with Massachusetts, New York, and California to a lesser extent, that are spending a lot but often failing to keep up with traffic congestion and road maintenance. There are also a few very problematic low-population states like Rhode Island, Delaware, Hawaii and Alaska, which contribute an outsized share of the nation’s structurally deficient bridges, poor pavement conditions, and high administrative costs—money that doesn’t make it to roads.”