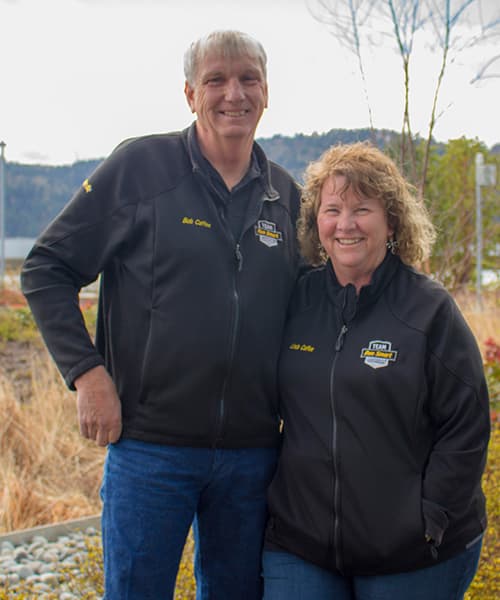 Caffee has been fascinated by trucks from a very young age; not yet a teenager. The idea of being in control of one of these behemoths scared and excited her at the same time. Years went by, she married and had two wonderful daughters before actually being able to get her chauffer’s license and sit behind the wheel of a truck. Bob, her husband of now 41 years, was a diesel mechanic for a small trucking company in the oil field, and every once in a while, they would need a fill-in driver. That is when she was able to get some time behind the wheel of a truck. At that point, she realized that she was still in awe of trucks and her ability to drive one safely down the road.

When their youngest daughter left for college, they were ready to start the next chapter of their lives as truck drivers and owner-operators. They entered the world of truck driving in their usual manner as very shy and quiet wallflowers. In very little time though Linda found her stride and realized trucking was something that she enjoyed and liked talking about. As their daughters say, “our parents blossomed” into people who have now become mentors.

In 2004 after spending many hours reading the forums on Expediters Online, they decided that expediting was the field for them. Linda and Bob attended the Expedite Expo to learn more about expediting, talk to recruiters, and determine how they were going to buy their first truck.

“Expediting excited both of us as we liked the challenge of not knowing where we were going next or what we would be picking up. We bought our first Freightliner straight truck in 2005, and over fourteen years and three Freightliners later we are still just as excited to be doing what we are doing,” Linda said. “You might notice I use a lot of ‘we’s’ and I want to stress that I am in a team operation. When you get to know us, you will find that I like to come up with ideas and Bob is the one that figures out how to make it work or support me in something I want to do or something I think ‘we’ should do.”

Linda quickly went from being too timid to ask a question in the Expediters Online Forums to becoming one of the moderators as well as presenting at the Expedite Expo.  All of this allowed her to write a blog called “It’s a Teams Life” that can be found on the front page of expeditersonline.com. Through all of this, Bob is always there supporting Linda and even encouraging her to stay involved.

At a truck show early in Linda’s career, she met Ellen Voie and learned about WIT and became one of the first members. Around 2011 Linda joined the WIT Board of Directors.  “As a woman in the trucking industry, I have witnessed many positive changes for women truck drivers,” she said. “Much of that, I believe, is due to the hard work of Ellen and Women In Trucking.”

Bob and Linda continued to become more involved in trucking, and in 2013, they became one of Freightliner’s Team Run Smart Pros. As a “Pro” she writes a blog (teamrunsmart.com) each week about trucking, team driving, being a woman in trucking, and of course about their Freightliner Cascadia.

In 2018 Linda’s tractor-trailer experience came into play as a friend asked if she and Bob could help move one of the Dale Coyne IndyCar Race Team transporters from St. Louis, Missouri, to a Portland, Oregon, race. Linda and Bob have racing in their blood, and jumped at the chance to help out the team. They plan to help with five races in 2019. “Not only do we drive one of the transporters we also get to help in the garages for the race. Talk about a dream come true, I still have to pinch myself to really believe I was able to help behind the scenes during the Indianapolis 500 this year,” she said.

“My philosophy is to have a good attitude, dress and drive as a professional, be open to new opportunities, and follow through with promises. Being a mentor to others that are entering this profession is an honor and something I take very seriously. I am often asked when we plan to retire, and our answer is ‘when we quit having fun.’ So far, we both still look forward to getting into our truck and driving off into the sunset on another adventure,” she said.