“Hola, mi gentes!” With these words — which translate to “Hello, my people!” — and an engaging grin, Sue Peña greets an audience of TikTok followers in a video series chronicling her journey to become a professional truck driver.

A native of Brooklyn, New York, who now lives in central Arkansas, Peña (known as classysassy4u on TikTok) is proud of her family’s Puerto Rican and Taino Indian heritage.

“I wasn’t raised in Puerto Rico, but I follow the culture and traditions, both old and new,” she said. “We are a proud culture, and very welcoming in the sense that we will feed you — even if you’re not hungry.”

Peña has extensive experience in feeding people; she graduated from culinary school in New York back in 2007.

“I was actually chosen to appear on the second season of ‘Hell’s Kitchen,’ but my son was too young, and as a single mother, I couldn’t leave him alone,” she said. She describes her son Nicolas, who is now 20 and a member of the National Guard, as her biggest supporter.

While in her 30s, Peña decided her ultimate goal was to become a professional driver; however, it was nearly a decade later before she had a chance to follow that dream.

When The Trucker Jobs Magazine team first met Peña in July 2022, she was working as a crime lab forensic technician and moonlighting as an emergency medical technician (EMT), in addition to attending night classes at Diesel Driving Academy (DDA) in Little Rock, Arkansas.

In October, she completed her training and passed the final gauntlet — the driving portion of the CDL exam. She now has both hazmat and tanker endorsements and is slated to begin orientation with Dallas-based Stevens Transport in early January.

“My biggest challenge was believing in myself, believing that I could do this training that I started late in life,” said Peña, who is now 44.

“It wasn’t that I didn’t have confidence; if I didn’t, I wouldn’t have signed up,” she said. “Once I delved into it and realized, ‘Wow! So this is what trucking is,’ I thought, ‘Can I do this?’”

She began watching other women in the trucking industry, from her instructors at DDA to female trucking groups on social media.

“As I started following the trucking lifestyle of different women out there, some who were way older than me, I started to think, ‘OK, if they can do it, I can do it!’” she shared, adding that all of her instructors, male and female, brought real-world experience to the classroom.

We were privileged to follow Peña through part of her journey as she learned the basics of trucking at DDA, cheering her on as she gained confidence behind the wheel. When it was her turn to ring the bell at DDA — a rite of passage signifying a student’s successful passage of the CDL test — we were (arguably) just as excited as she was.

Like many women, Peña says she had to overcome obstacles related to both her gender and her ethnicity, in the trucking industry as well as other male-dominated career paths.

“I’ve have to stay 10 steps ahead (of everyone else) because I’ve got so many strikes against me. One, I’m a female. Two, I’m a Hispanic female. Three, I’m very short. I’m vertically challenged. I have to be on my game,” she said with a laugh.

Two of Peña’s instructors at DDA were women, something she says helped her build confidence behind the wheel.

“Ms. Kat and Ms. Rachel, those two were the most that really inspired me to continue pursuing what I was doing. There were days I was like, ‘Aw hell, I can’t do this!’” she said. “But after speaking with them, learning what trucking was like when they started, I realized it was actually harder for them. They paved the way. If it wasn’t for (women like) them, I wouldn’t be able to do this.”

Peña says the most memorable milestone of training, at least for her, was the first time she drove a truck a short distance across the driving pad.

The second-most memorable step, she says, was the first time students in her class took the school rigs out on the road.

“I can only imagine what the instructor was thinking and feeling, knowing that this person was driving a truck for the first time,” she said. “Now I’m comfortable with it.”

Watching Peña’s skills progress from those first shaky, tentative attempts to smoothly and confidently completing straight and offset backs, then 90-degree backs and other maneuvers was an amazing experience for The Trucker team.

While she’s excited about starting her new career behind the wheel, Peña is well aware that she still has much to learn and that actual over-the-road driving will be quite different from training. The challenge is one she looks forward to overcoming.

“Male or female, if this is what you want to do, if this is your passion, if all you think about when you get up and go to bed is driving a truck — then go for it,” she said when asked what advice she would give other would-be drivers. “Do it for the right reasons, do it with the best intentions, and just go for it.” 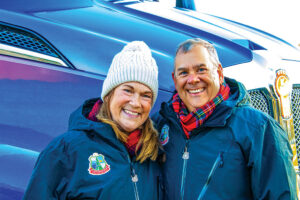 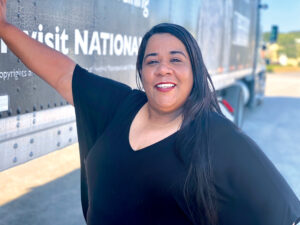 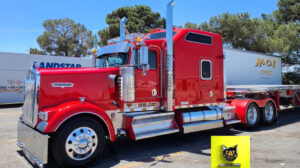 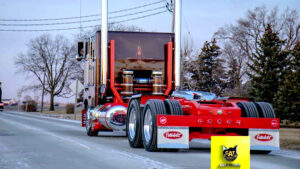