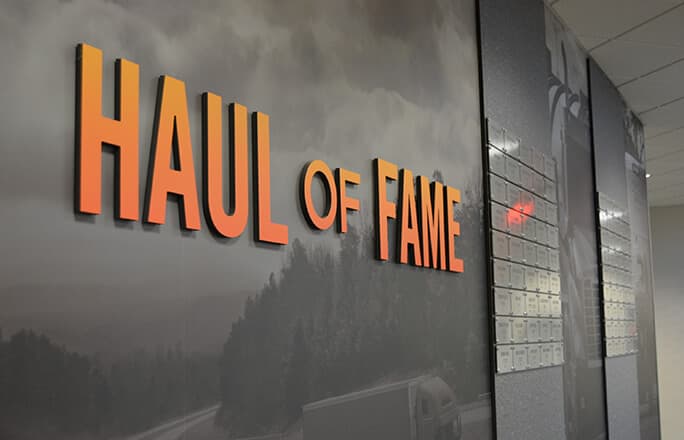 GREEN BAY, Wis. — In recognition of those who live and embody its Safety First and Always core value, Schneider, among the nation’s largest truckload carriers, recently honored hundreds of its most accomplished drivers with awards celebrating career driving milestones.

The prestigious honor of induction into Schneider’s Haul of Fame is reserved for drivers who have accumulated at least 3 million safe driving miles and/or 20 consecutive years of safe driving without an accident. This year, 26 new inductees met these criteria, earning them membership alongside over 300 of Schneider’s elite drivers. Each inductee will have a commemorative plaque installed on the Haul of Fame wall at Schneider’s corporate headquarters in Green Bay.

“The honor and recognition these professional drivers have earned show that they truly exemplify our ‘Safety First and Always’ culture,” said Tom DiSalvi, vice president of safety, driver training and compliance at Schneider. “These outstanding drivers are the latest to contribute to a long history of safe driving, and we’re proud of the tradition they carry on through their achievements.”

The Million Mile Award is an honor earned by Schneider drivers who have transported freight over 1 million miles while remaining accident-free. This year, the number of drivers reaching million-mile safety marks is as follows:

These new honorees have driven accident-free for the equivalent of 8,112 trips around the Earth’s equator. Through sleet and snow, across icy bridges and up winding mountain roads, Schneider drivers champion safety as their primary objective.

Throughout the year, Schneider hosted 14 award banquets to recognize the Haul of Fame inductees as well as drivers receiving the Million Mile Awards and Consecutive Safe Years Driving Awards.

Professional drivers who are interested in earning a spot in the Haul of Fame and are eager to make safety their top priority can learn about driving opportunities with Schneider by visiting schneiderjobs.com.