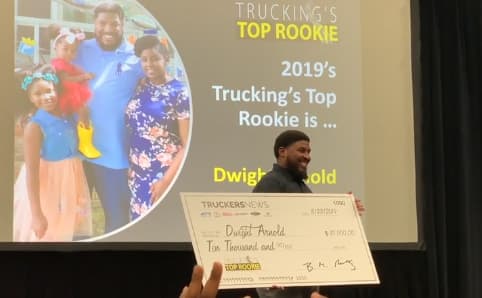 Presentation of the award was made August 23 during the Great American Trucking Show here.

Arnold, 38, lives in Clarksville, Tennessee. He won $10,000 and prizes from the RoadPro Family of Brands and Rand McNally. Arnold also received $1,000 from his company for winning the award.

“It gives you a buffer so I can work harder and get more done, clear debt and prepare a better life for my family,” he said of winning and the cash prize. “It’s a dream come true.”

According to the Stevens Transport website, Arnold was born in Kissimmee, Florida, and raised in Jacksonville, Florida.

In 2001, Arnold, joined the United States Army and during his time in the service, served as an ammunition specialist, military recruiter and a special unit transportation officer.

After retiring from the service in August 2014, Arnold said he wanted a profession that matched what he was already used to doing and allowed him to see his family more.

Having experience in the transportation industry, he realized that a profession as a truck driver would be the perfect fit and obtained his CDL from Tennessee Truck Driving School and graduated from orientation at Stevens in August of 2018.

Today, Arnold is a member of the Stevens Independent Contractor Division and is driving in the company’s Kraft dedicated fleet.

“Trucking has given me the opportunity to make a better home dynamic for me and my family,” Arnold said. “As for my future plans with Stevens, I’m hoping to start a fleet with four to five trucks and I also hope to build financial stability with my family, thanks to the financial success that I have had with trucking so far.”

“Dwight is a driver that I know will complete every task presented to him with a positive attitude,” Montgomery said. “He consistently delivers every load on time and is a very motivated and exemplary driver. I am glad to have him on my team.”

Arnold was one of 11 finalists for the award.

The other 10 finalists, the driver training school they attended and their employer include:

The award is named after the late Mike O’Connell, who was formerly the executive director of the Commercial Vehicle Training Association, and who originated the idea of the award.

O’Connell said he believed that honoring a top rookie driver helped show new drivers they are appreciated by the trucking industry. 8