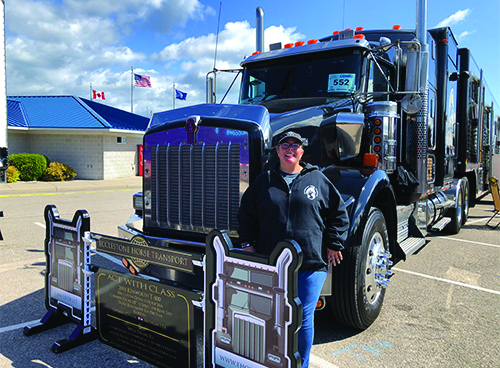 “Whoever said, ‘Find a job you love, and you’ll never work a day in your life’ was talking about me,” said Su Schmerheim, paraphrasing a quote attributed to Mark Twain, the pen name of Samuel L. Clemens.

Schmerheim has combined a love of trucking with an older love of horses, and now makes her living running the U.S. division of Ecclestone Horse Transport. She’s also the Women In Trucking March 2020 Member of the Month.

Before hauling horses, Schmerheim participated in a far different field. “I sailed racing sailboats in the U.S. and Canada for 30 years,” she said. “I’ve sailed solo in everything from 19-foot to 55-foot boats, and I crewed for two years on an 85-foot schooner.”

Passionate about horses since her teenage years, Schmerheim still shows Arabian and half-Arabian horses near her Michigan home. She said the opportunity to make a living working with the animals she loves was too good to pass up. After losing a job in web support, Schmerheim was put in touch with a woman-owned horse-hauling business in northern Michigan.

“She asked if I had worked with horses,” Schmerheim explained, “and said it was easier to teach someone driving than how to handle horses.” She was invited to ride along on a day trip. “We clicked,” Schmerheim said, and soon she had her CDL.

That business later downsized and Schmerheim began working with her current employer, Queensville, Ontario-based Ecclestone Horse Transport (EHT). She had met EHT President Kyle Ecclestone about a year earlier, online, when he was in the market for used commercial horse equipment. “I almost quit hauling horses,” she said, “but Kyle wouldn’t let me.”

Today Schmerheim handles U.S. logistics for EHT, performing some customer-service duties such as quoting rates, as well as doing some of the dispatching and, of course, driving. EHT doesn’t skimp on the equipment; Schmerheim drives a custom Kenworth T800 pulling a custom-built Doyle 15-horse trailer.

“We haul some of the top Arabs (Arabian breed of horse) in the U.S. and Canada,” she said, “and we have international clients, too.” Many of the horses participate in shows for the U.S. Equestrian Federation and other associations.

“(These are) primarily show horses,” said Schmerheim, “and some Olympic clients, and then horses that have been sold and are going to new owners. Anyone who wants to move horses.” Included are “snowbirds” who spend winters in Florida and want their horses nearby while there. “We call it the ‘Florida Season,’” she said.

Transporting horses takes some special driving skills in addition to knowledge of the cargo. “You always have to be alert to being cut off in traffic,” she said, “because you can’t brake hard. It’s kind of like hauling liquids in that you have to take curves and corners slowly.”

One important difference is that liquids don’t fall over in the trailer and get injured when the ride gets rough. Delivering an expensive horse that has been injured during the trip isn’t an option, but other problems can have an impact on the animal’s show or race performance.

“They can get sore muscles from leaning and bracing against the movement of the truck,” Schmerheim explained. Even stress can be a problem, as horses that are stressed are more difficult to handle and may not eat and drink properly.

“Each horse is an individual,” said Schmerheim. “If you’re a ‘horse person,’ you learn how to tell when they’re stressed or they aren’t feeling well.”

For many trips, the horses don’t require any special care other than smooth driving. “When we do mixed (multistop) loads, we give them hay and water and make sure they are traveling well,” said Schmerheim. For longer trips, horses can be put in “box stalls” that allow them room to walk around and even lay down. Hay can be placed on the floor, where horses can graze “naturally” by reaching down to eat. This helps prevent a condition known as “shipping fever.” Each shipment is different.

Still, Schmerheim prides herself on service and attention to detail. “All horses on my truck get the same treatment,” she said, “whether it’s a $200 ‘mutt’ or a ‘bazillion-dollar’ thoroughbred.”

Since livestock haulers are exempt from ELD requirements, drivers at EHT still use paper logs. That’s fine with Schmerheim. “How can a box tell you when to sleep?” she asked.

Schmerheim has participated in a few truck shows, including the Trucker’s Jamboree in Walcott, Iowa, the Shiawassee County (Fair) Truck Show in Corunna, Michigan, and the Richard Crane Memorial Truck Show in St. Ignace, Michigan, where she was presented with Women In Trucking’s Member of the Month award by association President and CEO Ellen Voie. While the shows are fun and rewarding, Schmerheim doesn’t plan to enter many. “It takes a lot of work to clean everything to show standards,” she explained, “and it means shutting down for a while to do the work.”

Her care for animals goes beyond the livestock in the trailer. It extends to her “co-driver” Jake as well. Formerly a “wild barn cat,” Jake is now a constant companion and EHT ambassador. The 6-year-old gray and white tabby has its own Facebook page (Jake Schmerheim) and is a registered service animal. The sound of an air brake being applied sends him rushing to the nearest window. “He loves to go trucking and has traveled more miles than most people have,” said Schmerheim. “He knows his own truck and will go to it and hop up on the step.”

He also responds to the terms “cookies,” “kitty-crack” and “big truck.” Always on a leash when outside of the truck, Jake accompanies Schmerheim into truck stops and restaurants and is well known among her clients, who often inquire about him. The names “Su” and “Jake,” along with a paw print, are stenciled on the driver’s door of Schmerheim’s tractor.

With Jake at her side, Schmerheim said she plans to continue pursuing the career she loves for some time. “My goal is to get there safely, no wreckers and no veterinarians,” she said. Horses in Schmerheim’s trailer, along with one lucky cat, can rest easy knowing they’re in for a smooth ride.

This is truly a dream job! I have a love and passion for horses and I would enjoy the drive and this women is an inspiration to me! God bless her on her travels! Awesome story!