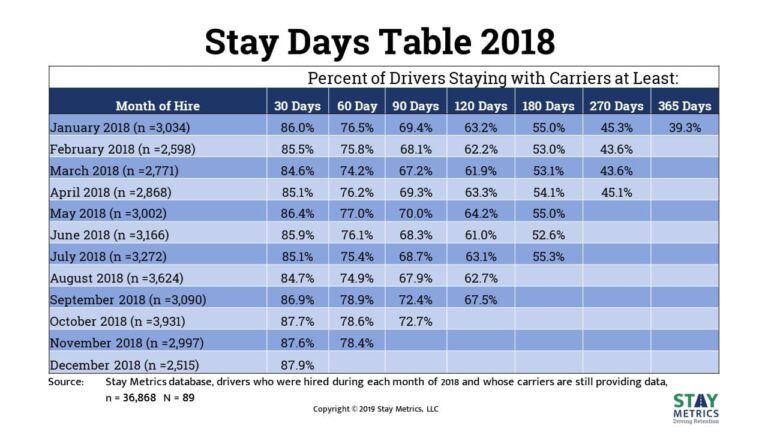 The new Stay Days Table serves as a “survivor” chart that shows the number of drivers hired by carriers each month and the percentage remaining at specific milestones after their date of hire —30 days, 60 days, 90 days, etc.

This table allows Stay Metrics to follow specific cohorts of drivers and to show how well carriers are retaining them over time, according to Tim Hindes, Stay Metrics co-founder and CEO.

As the table makes clearer than previous models, early driver turnover is a massive, industry-wide problem, Hindes said, noting that approximately 60 percent of the more than 3,000 drivers from 89 carriers hired in January 2018 did not make it one year with their carrier.

Retention trends seem to have remained consistent throughout the year so similar results are expected for each month’s cohort.

Hindes said the statistics come at a time when the driver shortage is of critical concern to motor carriers.

According to the American Transportation Research Institute’s 2018 Top Industries survey, the driver shortage is the No. 1 issue faced by carriers.

Unsurprisingly, driver retention is also high at the No. 3 spot.

Together these concerns are causing significant problems for even the best carriers in the industry.

They work exceptionally hard to find drivers in today’s market. If 60 percent of these drivers leave within one year, the driver shortage is not just an issue; it is a crisis, Hindes said.

“We believe the new Stay Days Table demonstrates the depth and pervasiveness of the early driver turnover problem. Our clients consistently beat industry averages for overall retention and this is their Stay Days Table. It represents some of the best in the industry,” Hindes said. “With drivers leaving so early, the driver shortage cannot be effectively countered. Our current version shows data for 2018 and we plan to update the metric for 2019 and beyond to continue monitoring the industry’s progress.”

The Stay Days Table saw a slight increase in overall retention for drivers hired in September and later. One possible explanation is that these drivers wanted to avoid changing carriers during the holiday season, Hindes said, adding that the data from the next few months will show if these fourth quarter hires match other groups’ retention percentages when they hit later milestones.