BELLEVUE, Wash. — PACCAR’s zero-emissions electric trucks reached a summit — literally — last week. On Nov. 5, a Kenworth T680 fuel-cell-electric tractor and a battery-electric Peterbilt Model 579EV became the first Class 8 zero-emissions vehicles to drive to the 14,115 foot summit of Pikes Peak in Colorado.
According to a statement released by PACCAR, both vehicles “displayed superb power and exhibited excellent drivability” over the 156 twisting turns and switchbacks during the 4,700-foot elevation trek to the summit. The trucks handily negotiated grades between 7% and 10% over the famous 12.42-mile Pikes Peak International Hill Climb course.
“We are very excited about the work Kenworth and Peterbilt have done in the development of zero-emissions technology. Conquering Pikes Peak demonstrates PACCAR’s leadership in fuel cell and commercial vehicle electrification,” said Kyle Quinn, PACCAR’s chief technology officer.
The Kenworth T680 fuel-cell-electric vehicle delivers 470 hp and has a 350-mile range with a 15-minute refill time. Kenworth and Toyota Motor North America are collaborating on a project to develop 10 zero-emissions Kenworth T680 trucks powered by Toyota hydrogen fuel-cell-electric powertrains.
“It’s a great accomplishment for the Kenworth T680 fuel cell electric vehicle to summit Pikes Peak. The Kenworth T680 trucks will be placed in operation with our customers at the Port of Los Angeles over the next few months,” said Kevin Baney, Kenworth’s general manager and PACCAR’s vice president. “The comprehensive Kenworth zero-emissions program also includes the Class 8 Kenworth T680E and medium-duty Kenworth K270E and K370E battery electric vehicles.”
The Peterbilt Model 579EV that climbed Pikes Peak is designed for optimal weight distribution and performance, PACCAR says. The fully integrated, all-electric powertrain uses thermally controlled lithium iron phosphate battery packs to provide a range of up to 150 miles. When used in conjunction with a recommended DC fast-charger, the state-of-the-art, high-energy density battery packs can be recharged in three to four hours, making the Model 579EV ideal for regional haul, port, pickup and delivery, and last-mile operations. The Model 579EV produces up to 670 hp and features regenerative braking that allowed the battery packs to recharge while descending from the peak, offering extended range.
During Peterbilt’s validation program, the Model 579EV has exceeded expectations and delivered outstanding performance, according to a company statement. There are currently 22 Peterbilt Model 579EVs on the road with more than 50,000 miles of real-world customer operations.
“Taking the Peterbilt Model 579EV to the summit of ‘America’s Mountain’ is an important milestone for Peterbilt and our entire lineup of battery electric commercial vehicles,” said Jason Skoog, Peterbilt’s general manager and PACCAR’s vice president. “Being the first battery-electric Class 8 truck to climb to the top of Pikes Peak is further validation of all the real-world miles Peterbilt has accumulated across our entire EV test fleet and demonstrates we are ready to deliver production vehicles to our customers next year.” 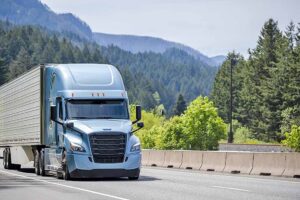