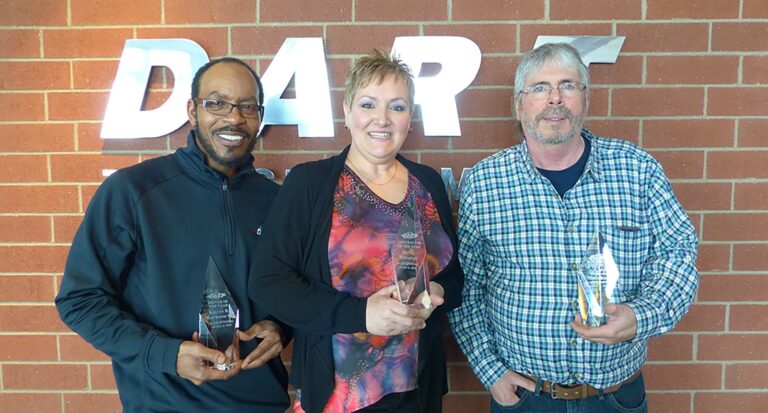 EAGAN, Minn. — Dart Transit Co. recently presented its annual awards for the Company Driver of the Year and the Contractor of the Year.

Kelvin Haywood, who works regionally out of the St. Louis area, earned the top honor as a company driver, while Mike and Bev Monahan, who share the driving duties on a dedicated account, were recognized as the past year’s leading contractors with Dart.

Haywood and the Monahans were respectively selected from a group of candidates who had been previously honored as either company drivers or contractors of the month with Dart in 2018.

In addition to the monthly award winners, the field of nominees also included a small group of company drivers and contractors who had compiled outstanding years with Dart. During the first quarter of this year, Dart’s management reviewed the group of nominees, examining key metrics from 2018 including active percentage, miles per gallon, out of route miles and overall miles driven. In order to be considered, the nominees also had to maintain an outstanding record for safety.

“We are very grateful to have had an impressive collection of nominees for both the contractor of the year and the driver of the year awards. The overall performances put together by Bev and Mike on the contractor side and by Kelvin among our company drivers were truly outstanding,” said Gary Randall, Dart’s senior vice president of fleet operations. “The professionalism and dedication that Kelvin, Mike and Bev display on the road and with customers is a great example for everyone at Dart. What they accomplished over the past year stands an inspiration to all of us. We believe it’s important to honor and to celebrate the accomplishments of professional drivers. We believe in recognizing excellence.”

Dart recently held an awards ceremony and a luncheon at its headquarters featuring Haywood and the Monahans as the guests of honor. The company broadcast the awards presentation over its Facebook Live video feed, and the Dart Network Podcast conducted interviews with the award winners and their fleet managers.

The Monahans have developed a long relationship with Dart. Mike Monahan, who has 38 years of experience in the trucking industry, contracted with Dart as an owner-operator in 1994. Bev Monahan has been working with Dart for the past eight years. She put a career as a nurse to the side to explore life on the road with her husband. The dedicated account the Monahans have serviced for the past several years has provided them with the opportunity to work with Dart in a unique manner.  Each day one of the Monahans is able to stay at home while the other is driving the truck. The Monahans are currently in the process of adding a second truck to their owner-operator operation.

“This is the best honor I’ve had in my entire career. I have always tried to focus on driving and doing my job to the best of my ability. It means a lot to both of us to be recognized for the job we are doing out here,” said Mike Monahan.

“I’m still kind of pinching myself over the whole experience and the honor,” said Bev Monahan. “We’ve had so many good things happen for us lately. It feels like it’s been Christmas for months. This award was huge for us. We are tickled pink about it, and we’re very appreciative.”

Haywood has more than 14 years of experience as a professional driver, and he is now in his fifth year of working as a company driver for Dart. A long-time volunteer coach and mentor with the Boys & Girls Club of St. Louis, Haywood, in searching for over-the-road opportunities, wanted to stay close to home throughout the week. Dart was able to offer Haywood a regional opportunity out of St. Louis that ensures he is home every night.

“I know what kind of work I put in every year, but I was still very surprised when I got the call that I was Dart’s Company Driver of the Year. It’s taken a while for it to sink in,” said Haywood. “I am very grateful to Dart for this honor. To me, this award speaks about you not only as a driver, but as a person. It’s at the top for my career. In fact, other than my sons being born, I would rank this second among all the highlights in my life.”