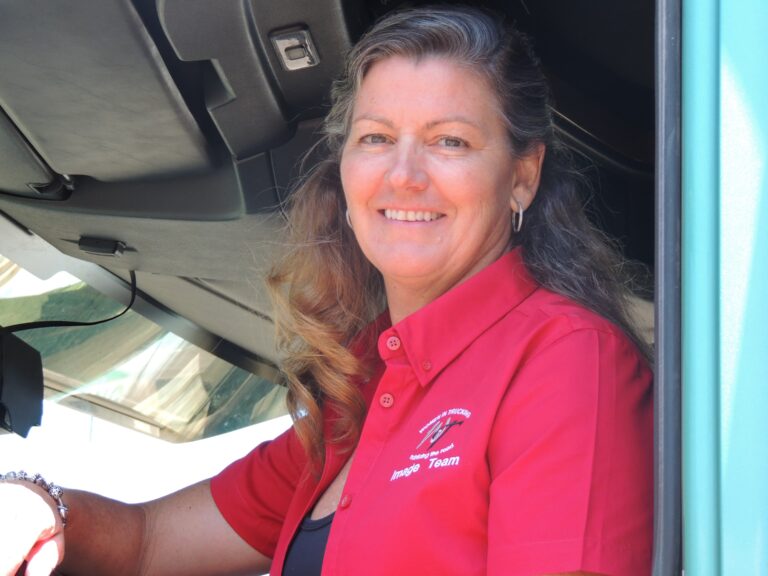 Jeramand operates a fleet of 22 trucks.

She and her husband Dan Boudreau, both successful New Brunswick-based entrepreneurs, also run a construction and building production facility and a Never Enuff Chrome & Detailing shop.

Phillip’s foray into trucking began as a 19-year-old university student when she was encouraged by her father to help out a good family friend who needed a driver to move a truck and trailer across the country to summer fairs.

She added a commercial driver’s license to her growing list of qualifications and has been involved in the industry ever since.

Born in Manitoba into a military family, Phillips lived in various parts of Canada and Europe before returning to Western Canada where she earned a degree in kinesiology and exercise physiology from University of Calgary, and a bachelor of science, dietetics, nutrition degree from University of British Columbia.

While still a student, Phillips opened a gym in Calgary, and for the next few years, was heavily involved in the world of sport and fitness, including back country guiding, cycling, rowing, coaching, and, inspired by the Olympic Games in Calgary in 1988, was a member of Canada’s national bobsled team for several years.

When a friend boasted that he could earn more in a week driving a truck in the oil patch than she could make in a month running a gym, Phillips accepted the challenge and spent six years working in Alberta’s crude oil pipeline system as a commercial driver, instructor, safety officer and a medic.

She relocated to Eastern Canada in 2006 where she and Boudreau grew Jeramand Trucking from a four-truck operation to the fleet it is today.

Phillips has incorporated her knowledge and experience in sport and fitness into her trucking business, and Tozai Synergy, her fourth business, the wellness arm, plays a key role in bringing better health/wealth/lifestyle balance to her employees.

“We need to pay better attention to the health and wellness of our drivers and encourage them to make better choices,” she says. “It’s vitally important for both safety and longevity.”

And Phillips puts her money where her mouth is.

She has shared her leadership skills and endless energy over the past number of years organizing and developing the Convoy for Hope-Atlantic, which raises awareness and funds for breast, colorectal, lung and prostate cancers. The convoy has been a rewarding opportunity for truck drivers and the industry to support important research. Phillips and her team have raised nearly $300,000 for cancer prevention, detection and treatment in Atlantic Canada, while celebrating the trucking industry.

Phillips sits on the advisory board of Prostate Cancer Canada (PCC), Atlantic Division, is a chair on the organizing committee of the Wake Up Call Breakfast-Moncton, and is an active volunteer for the Greater Moncton Prostate Cancer Support Group, with a very personal connection.

In 2014,  Boudreau was diagnosed and successfully treated for prostate cancer. In 2017 she received PCC’s Local Hero Award.

Phillips also shares her expertise as a nutritionist with youth groups, sports teams and the Hemophiliac Society, offers ergonomic assessments and nutrition coaching to business clients, and she is a dedicated supporter of the Ride For Dad, the Irishtown Community Centre, and other fundraisers for those affected by disease or cancer.

In 2017, she reinforced her hands-on involvement with the wellbeing of the people she works with by donating a kidney to one of her employees.

Phillips has been recognized for her commitment to community building and fundraising with the Transportation Club of Moncton Humanitarian Award, and this year was nominated for the Club’s Woman of the Year.

Last year, Phillips was named one of the Top Women to Watch in the industry by WIT’s Redefining the Road and was selected for WIT’s first Canadian Image Team. She said she is honored to be in a forum of influential women.

“I love the industry, and I love the impact females have in the industry,” she said. “Women have so much to offer, and I am thrilled to share my experiences and to advocate on behalf of the group.”

Phillips advice for other women in the industry, or those considering trucking as a career choice? “Don’t feel afraid of being judged, embrace who you are and what you do. Yes, it’s a tough industry, but you don’t have to accept the bad to enjoy the good. If you feel that something’s not working, speak up,” she said. “Trust yourself and believe that you can make a positive impact.”