WASHINGTON — The interval between inspections of America’s highway bridges is about to get longer following the May 6 issuance of a final ruling by the Federal Highway Administration (FHWA).

This new rule will extend inspection requirements for many bridges from two years to four years — and in some cases, six years.

The Moving Ahead for Progress in the 21st Century Act (MAP-21) required the Secretary of Transportation to update the NBIS. Through this final rule, the FHWA updates the NBIS to address MAP-21 requirements, incorporates technological advancements including the use of unmanned aircraft systems, and addresses ambiguities identified since the last update to the regulation in 2009.

One of the bridges that will be affected by the new law is the Interstate 40 bridge that connects Memphis, Tennessee, and West Memphis, Arkansas. That bridge was closed just last year after crews discovered a major crack in a structural beam on May 11, 2021.

Thousands of cars, trucks and tractor-trailers pass over the I-40 bridge every day of the year. When the crack, which was deemed to be a critical danger to the bridge’s structural integrity, was discovered, the bridge was shut down almost immediately. In addition to halting traffic on I-40, barge traffic on the Mississippi River under the bridge was temporarily blocked.

“The Tennessee DOT continues to review the new NBIS rules,” said Ted A. Kniazewycz, director of structures division at TDOT. “There are many changes that will provide long-term benefits to our program. There is also a considerable amount of new work that will be required to update the documentation on our inventory of over 20,000 bridges. We understand that the new rules will be phased in over the next six years, and we are working with our staff and IT teams to update our computer systems and records to meet the new rule requirements.” 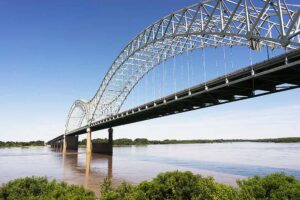 What the hell is the matter with this country? Have we gotten so lazy that people’s lives don’t matter? Bridge inspections and roads should be done MORE often, not less. Are lives at a premium? And what about tunnels? That Memphis bridge is a good example of laziness. The expansion doesn’t have much support. No, no, the thinking is wrong. Lives are not expendable.