ALEXANDRIA, Va. — Three truck drivers with three different stories of harrowing encounters on the road have one thing in common: Bravery and a willingness to help their fellow drivers.

Voting is now open for this year’s 2022 Highway Angel of the Year. Click here to cast your ballot. The deadline is Jan. 27.

The Truckload Carriers Association, its presenting sponsor EpicVue and supporting sponsor DriverFacts have recognized almost 100 recipients a year, with more than 1,300 to date.

Highway angels are nominated by their employers, fellow professional truck drivers or the motorists they’ve helped and saved. They are honored for their exemplary courtesy and courage shown on North America’s roadways.

At around 8:15 a.m. on March 17, 2022, Yeakley had just crossed the state border into Charleston, Missouri, when heard on his CB radio there was an accident up ahead.

He noticed smoke and a man wearing a safety vest flagging down drivers to alert them to the accident.

The scene was a fire-filled, chain-reaction crash in dense fog that involved more than 45 vehicles. Yeakley pulled over and jumped into action.

“I went up there; they already had a couple people out,” Yeakley said. “Some people had some broken arms, one had a collapsed lung, a few broken ribs from the impact.”

Yeakley, a 15-year member of the Army National Guard, is trained as a combat lifesaver and could quickly assess the severity of the scene.

He surveyed the situation so he could tell the paramedics when they arrived. Fire spread in the crashed vehicles, and tires exploded all around them.

“There was one guy trapped in his truck,” he said. “So, me, a sheriff, a state trooper and a FedEx driver, we did what we could to get him out.”

Yeakley and the group were able to pry the dashboard off of another trapped crash victim and rescue him from his vehicle. The flames, Yeakley said, were surrounding them.

Once the crash victim was rescued from his truck, Yeakley and a sheriff ran back to the scene to try to rescue the driver of a car trapped between a truck and a trailer, which was also surrounded by flames.

“By the time we got there, the fire had gotten into the car,” he said. “We watched him burn.”

Yeakley, who has been driving a truck for four years, said he wouldn’t hesitate to jump back into the fire again to rescue drivers, crediting his military training for preparing him for the experience.

At around 6:25 p.m. on Oct. 6, 2022, along Interstate 5 north near Los Banos, California, Schjoth saw a FedEX tractor trailer that had left the roadway, traveled down a steep, 75-foot embankment and rolled on its side.

Schjoth pulled over on the shoulder, grabbed his flashlight and ran down the hill to render aid.

“I climbed the barbed wire fence and went out in the field where they were laying on their side,” Schjoth said. “I thought, God, please let them be alive.”

The driver who was operating the truck when it left the highway was in the passenger area of the cab. He reported pain in his ribs and a possible head injury.

The co-driver, who was in the sleeper berth, suffered from a head injury.

Schjoth found a way to pull the windshield free from the truck and assisted that driver by pulling him up through the hole.

Schjoth then went back to the truck and pulled the other co-driver free.

“I got 911 on the phone, and I said, ‘I need two ambulances — one with a head injury and one with possible broken ribs.’”

Back up at the highway, he used the strobe feature on his flashlight to try and get a truck or vehicle to stop and help, but none did.

When he returned to the crash site, Schjoth noticed three horses got loose from where the truck had gone through their fence, so he ended up herding the horses back into their pasture three times while on scene, keeping them from escaping up and onto the interstate.

When the California Highway Patrol officer arrived and Schjoth explained what he had done to help, the officer seemed surprised that he had done so much. The officer told him he could depart and that emergency personnel were on the way.

“We lucked out that they were alive — they lucked out,” Schjoth said.

When asked why he went to the lengths he did to assist, he said, “That’s another truck driver down there — they’ve got families — I didn’t do anything special; I just did what needed to be done.”

At around 2:45 p.m. on June 15, 2022, in Walla Walla County, Washington, near Wallula Junction, Uhrich was stopped at the intersection of Dodd Road at Highway 12 when he saw a pickup truck pulling a utility trailer with an industrial mower on board slam into the back of a tractor-trailer and catch fire.

“I was literally already on my way out the door with the fire extinguisher in hand,” Uhrich said, noting that another vehicle slammed into the back of the first crashed pickup truck just at that moment.

Uhrich said the driver of the first pickup was able to exit his vehicle but sustained hand and face injuries. Uhrich guided this injured driver to the side of the road away from the flaming truck.

“That’s when I realized that the other car that had hit was also on fire,” Uhrich said.

Uhrich used his fire extinguisher to extinguish both fires.

The driver of the second crashed vehicle, however, suffered significant injuries; both he and his passenger were thrown from the vehicle. Uhrich used the rest of his fire extinguisher to subdue flames near the second vehicle so he could get to the victims.

“I pulled him away from the vehicle,” Uhrich said. “I had to put him down because he was slippery, because he was just covered in blood, and I had to duck — there was ammunition in the car — as it caught fire they were popping off in the car.”

Why does Uhrich take such risks to help these drivers?

“You live by a code — you’re taught to preserve life,” Uhrich said, adding this wasn’t his “first rodeo.”

Receiving medical training in the Norwegian Army when he was younger, Uhrich knows trucking can be dangerous and accidents happen. 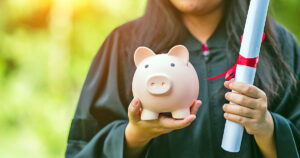